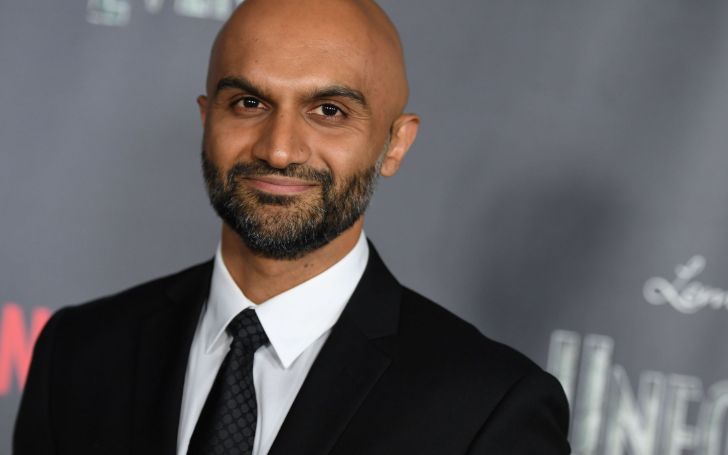 Usman Ally is a Pakistani-American actor who’s best known for his portrayal in the comedy-drama A Series of Unfortunate Events as Fernald the Hook-Handed Man. Also, he is very famous for his appearance in Madam Secretary, Star Trek Into Darkness, Nobodies, and Suits.

Usman Ally was born under the birth sign Leo on August 27, 1982, in Swaziland to Pakistani parents. He spent his childhood days in Kenya, Botswana, Tanzania, and Pakistan. He has American and Pakistani nationality and has Asian ethnicity. However, the information related to his parents and siblings is missing.

Talking about his education, he completed his Bachelor in Art from Lewis & Clark College. After that, he joined the University of Florida to receive a Master’s of Fine Arts in acting.

Is Usman Ally Married Or Dating?

The 40-year-old Usman Ally is a married man. He has shared the wedding vows with motivational speaker Malena Mai in the year 2008 after a few years of a dating relationship.

As of 2020, they have completed 12 years of togetherness and still share a very strong bond with each other. To this date, there is no bad rumor of their relationship in the media.

His Net Worth; Insight on His Career

Usman Ally has an estimated net worth of around $1 million as of 2022 which he has collected from his acting career since 2008. To this date, he has around 40 acting credits in his name and still adding on it.

While talking about his career in detail, soon after the graduation, he started acting after appearing in the minor roles in movies and series such as The Chicago Code, Boss, The Group, Chicago Overcoat, Mind Games, and so on.

His career started getting limelight after he appeared in the 2014 Madam Secretary as Zahed Javani. In the series, he has shared the screen alongside Tea Leoni, Geoffrey Arend, and Patina Miller. In 2015, he was part of a comedy television series Veep as Ambassador Al Jaffar.

His career got a big break after he portrayed the character of Fernald the Hook-Handed Man in the black comedy-drama web television entitled A Series of Unfortunate Events.

Some of his other notable TV series includes Curb Your Enthusiasm, Better Things, Suits, Mike Tyson Mysteries, Lifeline, and On Becoming a God in Central Florida.