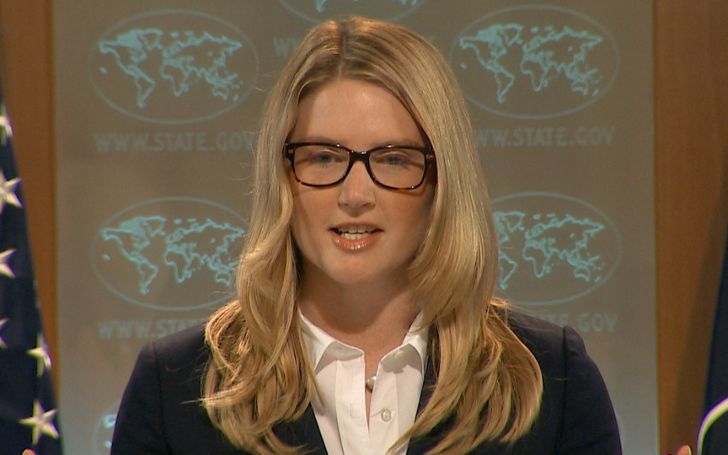 Marie Harf is an American journalist and political commentator who is currently serving Fox News Channel. Previously, she served the State Department as a Deputy Spokesperson and Acting Spokesperson.

Marie Harf was born on June 15, 1981, in Granville, Ohio as Marie Elizabeth Harf. She is the daughter of James E. Harf and Jane Ax Harf.

While talking about her education, she joined Granville High School for her schooling and graduated from there in 1999. After this, she joined Indiana University Bloomington and completed a Bachelor in Arts degree in Political Science. Moreover, she has also done a Master’s degree in Foreign Affairs from the University of Virginia.

She has a tall height of 5 feet 6 inches.

Who Is Marie Harf Married To?

The 39 years old, Marie Harf is married to her boyfriend Joshua Paul Lucas. They shared the wedding vows on April 14, 2012, at Vienna Presbyterian Church in Vienna and thier wedding was officiated by thier mutual friend, Reverend Erin E. Blair.

As of now, the pair has celebrated eight years of togetherness and still shares a strong bond without any rumors of separation. Also, there is no news of the pair sharing baby soon.

Joshua Paul Lucas is a graduate in law and strategy from Tufts University. He is the son of Tricia H. Lucas (supporter chief at New Futures) and John E. Lucas (legal counselor for the state of New Hampshire Office of Legislative Services).

Her Net Worth and Career In Detail!!!

Marie Harf has a net worth of around $3 million which she has collected from her career as a journalist as well as a commentator. Marie started her career as the Middle Eastern Leadership Expert for the Directorate of Intelligence, the CIA. Later on, she was chosen as the media spokesperson for the whole of the CIA.

In 2012, during the Presidential Elections, she helped craft President Barack Obama’s national security and communications strategy. In 2013, she was appointed the Deputy Spokesperson for the Department of State.

Also, she has worked with Secretary of State, John Kerry in June 2015. She was his Senior Advisor for Strategic Communications. In 2017, she became a FOX News liberal contributor, and currently, she gives commentary on national security. She’s also working as the Executive Director of Serve America PAC.