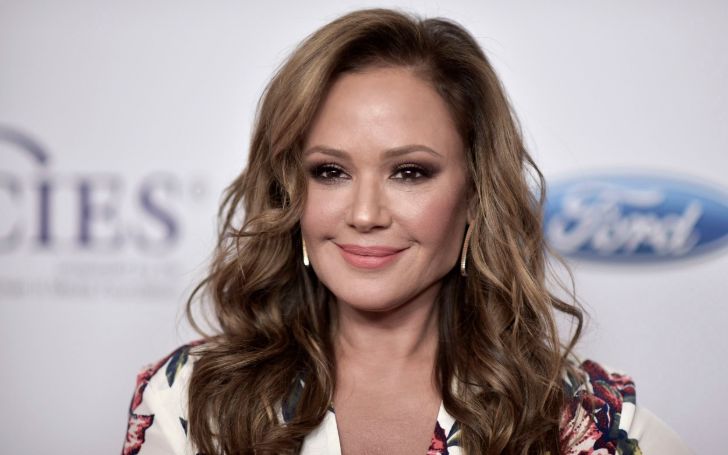 Leah Remini is an American actress who is best known for her portrayal in The King of Queens as Carrie Heffernan and Kevin Can Wait as Vanessa Cellucci. Apart from acting, she is also a famous author as well as an activist.

Leah Remini was born as Leah Mari Remini on June 15, 1970, in New York, the USA. She is the daughter of George Remini and Vicki Marshall. She was raised alongside her older sister, Nicole, and a brother, Michael. Also, she has four half-sisters: Elizabeth, Stephanie, Christine, and Shannon. One of her siblings named Stephanie died in 2013 due to cancer.

She is of American nationality and belongs to Austrian-Jewish descent. During her early age, she was raised in the Catholic tradition after being baptized Roman Catholic.

She moved to Los Angeles, California at the age of 13 along with her mother, and spent most of her teenage days over there.

Is Leah Remini Married Or Not?

The 50 years old Leah Remini is a married woman. She has shared the wedding vows on July 19, 2003, with longtime boyfriend Angelo Pagan. As per the sources, the pair met for the first time in 1996 at a Cuban restaurant. Eventually, they started dating and after seven years of love life, they got married.

After a year of marriage, the pair welcomed a daughter named Sofia on June 16, 2004. Since their marriage, they are going very strong together without any rumors in thier relationship.

Prior to this, her husband married and has shared three sons.

Her Net Worth, Salary and House

Leah Remini has an estimated net worth of $25 million as of 2020 which she has earned from her acting and writing career. As per some of the reliable sources, she is supposed to make around $9 million from her role in the long-running sitcom, The King of Queens.

From her multi-million worth, she is living a lavish lifestyle. Back in 2003, she bought a $3.75 million mansion in Studio City, California which features 5-bedroom and 9-bathroom and made in 9,300 sq.ft. As of now the price of the house is $8.5 million.

Leah Remini made her acting debut in 1988 with her first role in TV series, Head of the Class. The following year, she appeared in the TV Series, Who’s the Boss? as Charlie Briscoe. After this, she has worked in several TV movies and series with more than 45 acting credits in her name.

Her career got huge limelight after she was cast in the  CBS sitcom The King of Queens as Carrie Hefferman. In the series, she shared the screen alongside  Patton Oswalt, Lisa Rieffel, Kevin James, among others.

Some of her other notable work includes Paradise, The Man in the Family, Saved by the Bell, Evening Shade, Diagnosis Murder, Star Witness, First Time Out, Biker Mice from Mars, The King of Queens, In the Motherhood, Family Tools, Handsome: A Netflix Mystery Movie, Kevin Can Wait, Mean Jean.