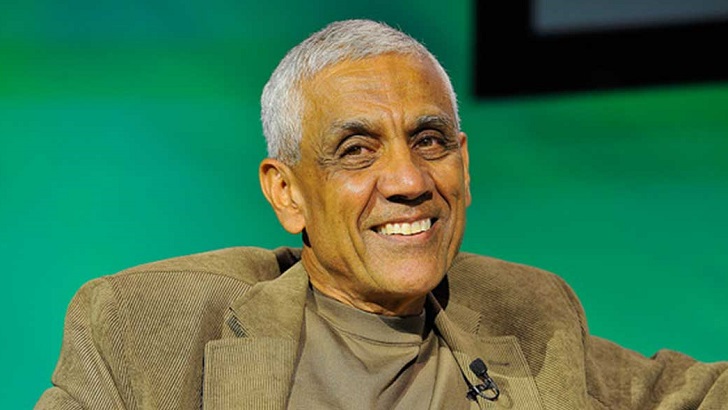 Vinod Khosla is a founder of Khosla Ventures, a successful private venture capital firm operated by a single investor. It invests in experimental technologies like mobile, biomedicine, robotics, and more. As of 2017, the company had total assets of $5 billion.

The accomplished venture capitalist Khosla is also regarded as one of the successful and influential personalities in Silicon Valley, California. Before launching his own fund, Khosla spent 18-year at Kleiner Perkins Caufield & Byers (now known as Kleiner Perkins).

Behind his splendid business career, the billionaire Khosla is also involved in an infamous failed decade-long legal battle to privatize Martins Beach, overturning the California Coastal Act of 1976.

Khosla’s income came from his various business ventures. After spending nearly two-decade with the venture capital firm Kleiner Perkins as a general partner, he went on to start his own fund Khosla Ventures. Its value was about $5 billion in assets under management as of Sep 2017.

Khosla’s wealth also diversely came from his many other business endeavors like HackerRank, a technology company, SKS Microfinance, an Indian microfinance company, and more.

In May 2011, Vinod Khosla, along with his loving wife Neeru, promised to give away at least half of their vast fortunes that estimated at $1.4 billion (Rs 6,300 crore) to non-profit entities, joining the pledge started by billionaires Warren Buffett and Bill Gates. The pledge consists of 400 wealthiest people in the world, and it is estimated to be worth $1.2 trillion combined.

Vinod also supports his wife Neeru’s California-based non-profit organization CK-12 Foundation, which aims to evolve open-source textbooks and a low-cost K-12 education in the United States and the rest of the world. The duo also donated $600,000 to the Wikimedia Foundation.

Moreover, the businessman is also a pivotal member of many other charitable organizations such as The Indus Entrepreneurs (TiE) and among others. He is also a part of the board of trustees of the Blum Center for Developing Economies at the University of California. It aims to address the crisis of extreme poverty and disease globally as well as to find its solutions.

It’s been nearly a decade since the billionaire tech investor Vinod Khosla is engaged in a bitter legal dispute to personalize the beach. In 2010, the first lawsuit was filed in California state court after Khosla began to block people from entering the beach.

Although the businessman won an early judgment, things became more challenging after a suit he lost, brought by the Surfrider Foundation. San Mateo Superior Court ordered that he couldn’t block people from accessing the beach without first obtaining a permit from the California Coastal Commission.

Sources address that Khosla bought the property for roughly $32 million back in 2008. And he started keeping the public off a piece of the beach by 2010. Khosla put on an offer worth $30 million, saying he would sell a small slice of his property to enable the public to gain access to the beach again.

The Californian court ruled that the founder of Khosla Ventures must restore public access to Martins Beach in August 2017. The following year, Vinod went on to file an appeal with the Supreme Court. But, in October of that year, the Supreme Court announced that they could not take any hearing appealed by the California court.

The San Mateo County discovered that the previous owner of the property had not permitted the public from access to Martins Beach in November 2018.

Vinod Khosla was born on January 28, 1955, in India. He holds dual citizenship, American and Indian. His father was in the Indian Army force. He did his schooling from Mount St Mary’s School.

He obtained a B.Tech in electrical engineering from the Indian Institute of Technology Delhi. He later went on to join the Carnegie Mellon University and earned a master’s in biomedical engineering.

Furthermore, Khosla also got his MBA from Stanford Graduate School of Business. Following his MBA, he landed the job at the electronic design automation company Daisy Systems.

In 1980, Vinod Khosla tied the knot with his childhood sweetheart Neeru Khosla, the co-founder, and chairman of the non-profit CK12 Foundation.