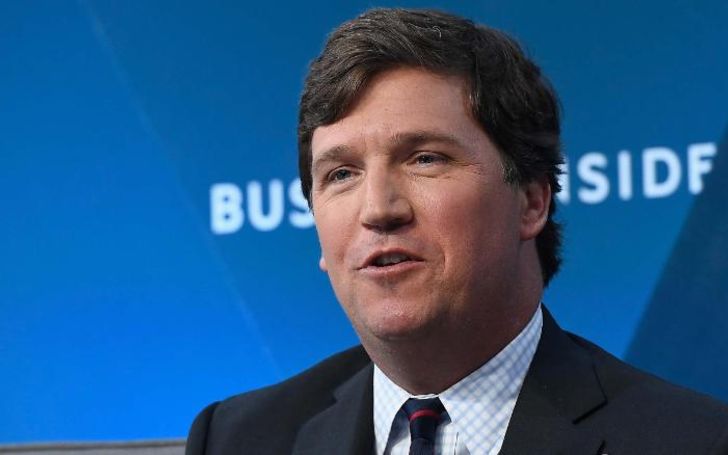 Tucker Carlson whose real name is Tucker Swanson McNear Carlson was born on May 16, 1969, in San Francisco, California, U.S. He is the son of former Los Angeles news anchor and U.S. ambassador, Richard Warner Carlson, and Lisa McNear.

His parents separated when he was six years old and was raised by a single mother alongside his brother Buckley Swanson Peck Carlson.

Talking about his education, he completed his schooling from St. George’s School in Middletown, Rhode Island. Later on, he earned a BA in History from Trinity College in Hartford, Connecticut.

What is His Marital Status?

The 53 years old Tucker Carlson is in a marital relationship with Susan Carlson. The pair shared the wedding vows in the year 1991 and since then going very strong.

Has $30 Million Net Worth

As of 2022, the net worth of Tucker Carlson is calculated to be around $30 million while his salary per annum is announced as $6 million making him one of the highest-rated anchors. Back in 2018, his net worth was just $8 million. All of his income is possible from his successful career in the field of journalism.

Also, he has added to his net worth from the sale of his book. Back in 2017, he made a $10 million book deal for his books named Ship of Fools: How a Selfish Ruling Class is Bringing America to the Brink of Revolution and Politicians, Partisans and Parasites: My Adventures in Cable News.

One of the highest-paid journalists is living a lavish lifestyle from his millions and millions of worth. Currently, he resides in a $3.985 million mansion located in Kent, Washington DC which features 5 bedrooms and 6 and a half bathrooms after selling his another Kent house for $2.04 million.

Tucker Carlson started his career as a fill-in correspondent for The Weekly Standard. Also, he was a writer for Reader Digest and also used to compose for The Daily Beast, Esquire, and The New York Times Magazine.