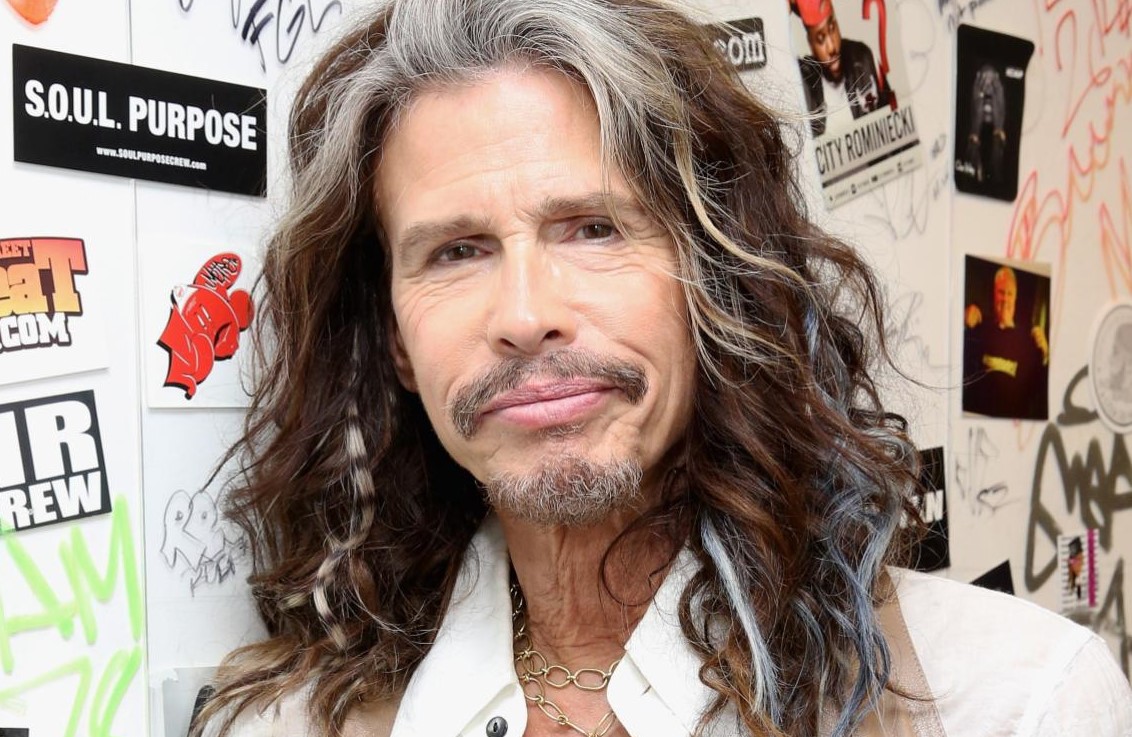 Steven Tyler is an American singer/songwriter, multi-instrumentalist musician, actor, and TV personality most famous as the frontman of the American hard-rock band, Aerosmith.

Steven Tyler is the personification of everything that a rock n’ roll frontman should be: charismatic, sexy, insanely talented, and popular beyond belief.

Tyler’s legendary low-tenor voice spans four octaves and has earned him the apt nickname, “The Demon of Screamin“. His signature falsettos and screams have been a staple of the hard rock scene that defined the ’70s and ’80s.

Despite his other ventures — of which there have been many — the lion’s share of his vast wealth comes from his time as the frontman of Aerosmith.

In their heyday, Aerosmith was one of the biggest hard-rock bands of all time, and Tyler is held on the same pedestal as Freddie Mercury, Robert Plant, Jim Morrison, and the like, as one of the best — if not the best — rock frontmen in history.

Despite numerous line-up changes, the quintessential Aerosmith-sound has remained the one constant throughout the decades, and Steven Tyler is considered by many to have been the anchor holding the band at bay in its rockiest years.

In their illustrious half-century career, Aerosmith has released fifteen studio albums, six live albums, sixteen compilation albums, and two extended plays. Their albums have all performed exceedingly well, and to date, 18 of their albums have been certified platinum by the RIAA, with 12 of them going multi-platinum.

They officially hold the distinction of being the best-selling American hard rock band of all time, selling well over 150 million records worldwide with 70 million copies in the US alone.

Aerosmith also ranks in the upper echelons of critics’ list as one of the greatest rock n’ roll bands of all time, and for their invaluable contributions, they have won four Grammy Awards, six American Music Awards, and ten MTV Video Music Awards.

His Career As A Solo Artist

Besides a lucrative career in Aerosmith, Tyler has also ventured into the realms as a solo artist and collaborated with such acts as Alice Cooper, Mötley Crüe, and Carlos Santana.

His mainstream appeal and his acumen as one of the best rock vocalists of all time also helped land him the gig of American Idol judge for the show’s tenth season.

Besides his two-season stint with the show, Tyler has appeared in numerous shows as himself, most notably in The Simpsons, Wayne’s World 2, Two and a Half Men, Nashville, and Top Gear.

The table below shows his annual earnings through the years through album sales as part of Aerosmith.

In 2006, Tyler became the owner of a home in Hawaii with his then-fiancée Erin Brady. The quiet home was incongruous with Tyler’s rockstar lifestyle, but it was nonetheless lavish.

The two-bedroom, three-and-a-half bathroom 3,000-square-foot affair is reportedly said to have set Tyler back $4.8 million.

Located amidst the quiet wildlife of Maui, the house overlooks the ocean from multiple fronts, the most majestic of which is a deck specifically built for the purpose. The house is complete with a saltwater infinity pool, an aquarium, floor-to-ceiling windows, wood floors, and marble accents.

Tyler also put $1,325,000 on the table for his Hollywood Hills home in 2012. The mansion features a 270-degree view of the city. The glass walls are retractable and blend the outside and the inside of the house seamlessly.

The house also comes with an open master suite with an en-suite marble bathroom and outdoor decks. An infinity-edge pool, spa, and a fire pit complete the stunning estate.

Nothing screams rich millionaire quite like having an extensive car collection. Tyler Perry has indulged in the show of opulence with his own collection of exquisite cars, the pièce de résistance of which is his Hennessey Venom GT Spyder, for which he dropped $1,100,000 in 2012.

Only five of the cars have been manufactured, and Tyler was the first to own one. The 1,244 horsepower twin-turbo V8 fitted into the car enables it to reach a speed of 200 miles per hour in just 16 seconds.

Not only is Tyler, a car enthusiast, but he also has an avid fascination with motorbikes. He designed a brand of motorbikes dubbed Dirico Motorcycles or Red Wing Motorcycles that he debuted on September 15, 2007. Engineered by Mark Dirico and built by AC Custom Motorcycles, the bikes are frequently showcased in auto shows all over the country.

Steven Tyler is also a philanthropist at heart, and besides participating in motorcycle auctions for charity, he also helped found Janie’s Fund in 2015. The initiative helps young women who have been a victim of sexual abuse. The charity drive has since raised over $2.4 million.

In 2017, the first Janie’s house was established in 2017 in Atlanta, Georgia, and provides shelter and rehabilitation for women-at-risk and victims of sexual abuse.

Steven Tyler was born on March 26, 1948, in Manhattan, New York. His earliest musical influence was his father, Victor A. Tallarico, who was a classical musician and pianist. His mother, Susan Ray Blancha, had been a secretary.

Tyler is part Italian, part German from his father’s side while his mother was of Polish and English descent.

His passion for music was bolstered upon his exposure to the rock band, The Rolling Stones.

Steven Tyler was famously — or infamously — in a relationship with a superfan, 16-year-old Julia Holcomb, in the mid-’70s. Things progressed to the point that Tyler asked that Julia’s parents sign over her guardianship to Tyler so that the two could live together in Boston.

They lived in Boston for three years, hopping up on drugs. Their relationship was plagued by drug use, failed marriage proposals, and abortion before finally, their mutually-destructive relationship came to a head when Tyler — who was 27 at the time — was pressured on breaking up with the impressionable Julia.

Tyler was then in another high-profile relationship with model Bebe Buell. They had a daughter together, who the world now knows as Liv Tyler, actress extraordinaire.

He was then in a relationship with the actress and model Cyrinda Foxe. They were even married for a brief spell, from 1978 to 1987. During their marriage, Tyler became a father for the second time on December 22, 1978, this time to daughter Mia Tyler.

Tyler married for the second time to Teresa Barrick on May 28, 1988. With Barrick, Tyler fathered daughter Chelsea, born in 1989 and a son, Taj, born in 1991. They separated in February 2005, and their divorce was finalized a year later in January 2006.

He then got engaged to Erin Brady in December 2011 after dating since 2006, but subsequently called off the engagement.

His proclivity towards drugs has plagued steven Tyler since his teen years. He was expelled from his high school, Roosevelt High School, for drug use.

His drug use proliferated upon his joining Aerosmith, with him and guitarist Tyler Perry enabling each other. Their self-destructive duo was called Toxic Twins.

A reckoning was coming, and come it did: in the form of a motorcycle crash. In 1981, while on his bike, Tyler crashed head-on with a tree, splitting open his heel in the process.

But even a near-death experience was not epiphany enough, and after being hospitalized for two months, his drug use continued — worsened even.

What came as a wake-up call was his daughter, Liv Tyler. He realized that he needed to be a better father to Liv and a better man as a whole. About his decision to get help, Tyler said:

“Liv is possibly the biggest reason for me changing the way I lived. She is a dream daughter. When she was very young I wasn’t sure whether I was the father but, by the time she was eight, I knew for sure. I saw my features in hers and I cried. I started seeing her a lot and I think her mother had alluded to the fact I was her dad. I just said to her, ‘Liv, there’s something I want to tell you. I’m your Daddy.’ It was one of the most emotional moments of my life and I just stood there crying like a baby while she shouted, ‘I knew it, I knew it.’ I love her more than anything and have a great relationship with her. We can talk about anything.”

He entered into rehab in 1986 after an intervention with his bandmates and gained full sobriety by the mid-’80s.

Even after succeeding rehab, Tyler was not without his ails. His voice became a liability for him and exacerbated by his drug-fuelled rockstar lifestyle, his throat had become thrashed.

He had to have laser surgery performed to seal a ruptured blood vessel in his throat circa 2006. Not to be deterred, Tyler stepped into the studio after a few weeks of rest.

Steven Tyler also made the jaw-dropping claim in September 2006 when he revealed that he had lived with Hepatitis C for eleven years. The disease was most likely spread via an infected needle.