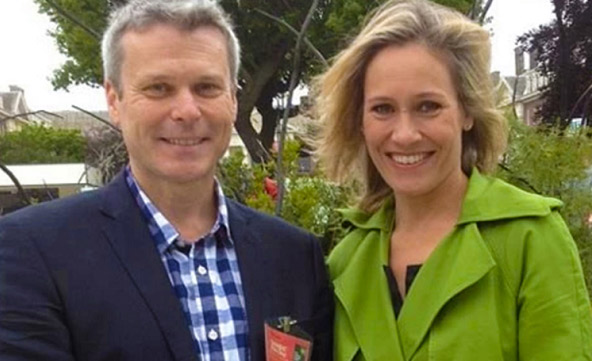 Sophie Raworth is a popular English broadcaster and journalist widely known for her marvelous work for the BBC. As a senior newsreader, she has presented BBC News at Six and BBC News at Ten.

Who Is Sophie Raworth’s Husband?

The 54 years old Sophie is a married woman. The one to win Sophie’s heart is her husband, Richard Winter. Her spouse popped out the question while they were on holiday in Italy on her 35th birthday.

A year after dating, Sophie and Richard tied the knot in an intimate wedding ceremony back in 2003.

Well, do you know the duo had previously dated as well? Yes, they dated for a while, even before their reunion. It was Richard who dumped her.

Sophie and Richard were meant to be together; thus, again fell in love, more deeply this time, during their reunion.

As of now, the couple enjoys seventeen years long conjugal life. They have not been dragged into any kind of controversies; likewise, there is nothing disclosed about their divorce or separation issues.

She Is The Mother Of Three Children

BBC News at One’ presenter, Sophie, has given birth to three children. She and Richard are parents to two daughters and a son.

As a keen runner, Sophie often takes her children out with her for a good run.

Now, the family of five enjoys a healthy familial relationship and resides in London.

Sophie Raworth, whose full name is Sophie Jane Raworth, was born on 15th May 1968. The 54 years old journalist was born in Redhill, Surrey, England. Her nationality is English, whereas she belongs to Caucasian white ethnicity.

Sophie did not reveal the name of her parents; however, her father is a business, and mother is a florist.

Regarding educational background, she attended Putney High and St Paul’s Girls. Likewise, she attended the University of Manchester and later completed a postgraduate course in journalism from City University.

The journalist started her journalism career in 1992, joining BBC as a news reporter. In 1997, she co-presented BBC’s Breakfast News. Her notable credits are BBC News at One, BBC News at Six, BBC News at Ten, WatchDog Daily, WatchDog Test House, and so on. She replaced Kirsty Young to become the main anchor of Crimewatch in 2017.