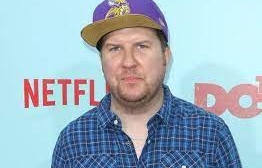 Nick Swardson is an actor best -known for his portrayal of Terry Bernadino in the series Reno 911!. In addition to working as an actor, he has also does stand-up comedy. The star has had a successful career in both the big and small screens.

Swardson first came into the industry in 1997 and got minor roles in shows and films, slowly he established himself as an industry regular. Similarly, he has also written screenplays and also produced shows.

How Much Is The Net Worth Of Nick Swardson?

Nick Swardson’s net worth as of April 2020 is around $5 million. He made this net worth from a career primarily as a comedic actor but has also delved into other career paths.

Swardson is also a decent box office performer whose films have raked in millions at the box office. In fact, his movie with Adam Sandler, Click, grossed over $237 million.

Nick’s film career began in 2000 when he worked on the film Almost Famous in a minor role. A year later, he would appear on Pretty When You Cry. Then in 2003, he worked on Malibu’s Most Wanted, which got him a lot of traction in the industry.

Grandma’s Boy came out in 2006, featuring him as Jeff. The same year worked on Art School Confidential, The Benchwarmers, and Click.

Similarly, 2007 saw the release of Reno 911!: Miami, I Now Pronounce You Chuck and Larry and Blades of Glory with him in minor roles.

He continued his streak of comedy movies with You Don’t Mess with the Zohan in 2008. He played extra roles in The House Bunny, Bolt, Bedtime Stories in the same year.

He took a short break from movies before returning in 2011 with Just Go with It. Some of his other well-known films are The Ridiculous 6, Sandy Wexler, etc. He has had a long and successful affiliation with Adam Sandler.

In a similar fashion, he is also a popular figure on TV, first starting out with LateLine, he later went on to gain nationwide fame for his character on Reno 911!. Other popular TV shows he has worked in are Star vs. the Forces of Evil, TripTank, etc.

Nick Swardson was born Nicholas Roger Swardson on October 9, 1976, in Minneapolis, Minnesota, the U.S to Roger Eric Swardson and Pamela Swardson. He has a sister named Rachel and a brother named John.

Nick went to St. Paul Central High and later opted to pursue a career in comedy rather than join college.

He is a very secretive celebrity when it comes to his relationships, and he has not revealed any details regarding his love life to the public or to his social media followers.