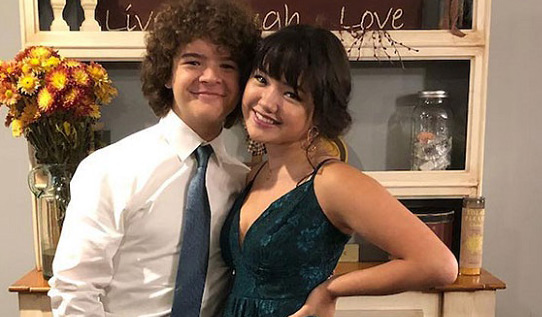 Lizzy Yu is a rising American musical theater performer and Instagram personality, who came into the spotlight for being Stranger things’ star Gaten Matarazzo’s girlfriend. She was a part of the team, Pinelands Thespians, who won drama competition at Montclair State University.

Lizzy Yu was born on 5th October 2002. The 17 years-old social media sensational was born in the United States of America, under the birth sign of Libra. She holds the American nationality, but her ethnicity is not disclosed.

The star’s girlfriend did not reveal the name and details of her parents; however, she has a sibling-sister named Liann Yu.

For now, she is attending Stafford Township Arts Center to polish her acting skills.

Before being Stranger Things’ actor’s girlfriend, she is a theatrical actress who calls herself as thespian. The actress performed on the stage as a member of the team, Pinelands Thespians, who won the competition at Montclair State University.

Her other theatrical works can be seen in Cinderella, The Outsiders, and many others.

American actor and singer Gaten Matarazzo started his professional career in 2011, and has appeared in many television series like The Blacklist, Prank Encounters, Lip Sync Battle, Stranger Things, The Angry Birds 2 (voice of Bubba), and Ridiculousness.

The reason behind Lizzy’s fame is her relationship with Gaten. There is nothing revealed in detail on how they fell for each other. But, sources confirmed that they started dating in 2018’s summers.

Recently, Gaten even posted a couple of pictures of them wishing each other second Anniversary. The pair often shares photos of each other on their respective social media.

The actress and social media personality has not disclosed much about her personal life. Likewise, she even has not revealed her exact figure of worth. Similarly, she did not show her work life and professions clearly.

Her partner, Gaten, has a net worth of $4 million. He earns $250 thousand per episode of Stranger Things.

Her boyfriend is suffering from a rare genetic condition, cleidocranial dysostosis.