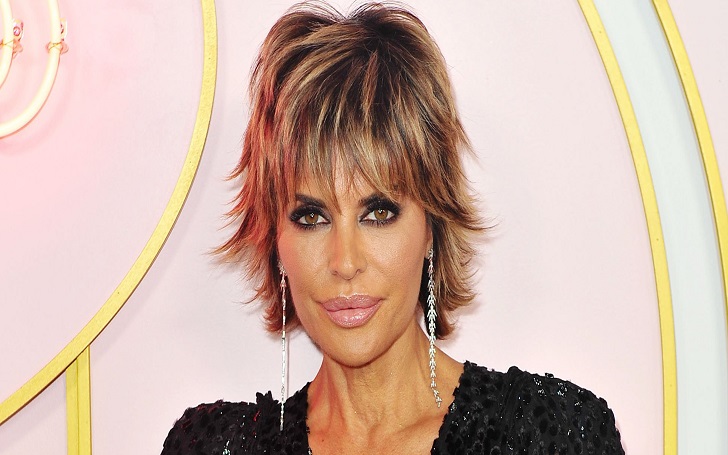 Lisa Rinna is an American actress, fashion designer, talk show host, author, and television personality who won two Soap Opera Digest Awards for playing the role of Billie Reed in Days of Our Lives. She is also popular as Taylor McBride in Melrose Place and as the host of Soap Talk.

She currently appears in the reality TV show The Real Housewives of Beverly Hills and has had guest roles in The Middle, The Hogan Family, 8 Simple Rules, and Entourage, starring Kevin Dillon. Lisa has also remained as a contestant on shows like Dancing with the Stars and The Celebrity Apprentice.

What is Lisa Rinna’s Net Worth?

The four-time Daytime, Emmy Awards nominee, has an estimated net worth of $8 million (£6.2 million). Her husband Harry Hamiln also has a small fortune of $5.5 million.

According to Cheatsheet, Lisa earned around $450,000 from the first season of The Real Housewives of Beverly Hills. She earned $2 million form her endorsement deal with Depends adult diapers in 2015.

She also earns well from her fashion line Lisa Rinna Collection which is available on QVC. Lisa also earned well from the sales of her books The Big, Fun, Sexy Sex Book, Rinnavation, and Starlit which can be purchased from Amazon for $16.99 for paperback and $34.80 for the hardcover edition.

She and her husband a 41,22-square-foot house in Beverly Hills which was built by her husband. The estimated price value of the property is currently unknown.

Lisa’s Career in the Entertainment Business

Rinna first appeared in John Parr‘s video of Naughty Naughty and later got the role of Jason Bateman‘s girlfriend in multiple episodes of The Hogan Family.

Her major role came in 1992 when she got to play Billie Reed in Days of Our Lives, featuring Bryan DattiloandLauren Koslow, but left in 1995. She reprised the role again from 2002 to 2003.

Lisa then went on to star as Taylor McBride in Melrose Place, starring Heather Locklear in 1996 and left the show in 1998. Rinna acted opposite her husband in Veronica Mars and Sex, Lies & Obsession.

She competed in shows like The Celebrity Apprentice and Dancing with the Stars and hosted the Soap Talk in 2002 for which Lisa won a Daytime Emmy Award.

She is also famous for going under the knife. Her face has noticeably changed over the years, and fans were too quick to notice that the Television personality has changed several parts of her face and body.

She was born as Lisa Deanna Rinna on 11th July 1963 in Newport Beach, California in the United States to father Frank Rinna and mother Lois Rinna. She has a sister named Nancy Rinna. Lisa is of American nationality and his ethnicity is mixed comprising of Italian, Portuguese, and English ancestry.

She attended North Medford Senior High School from where she graduated in 1981 after which she studied at the University of Oregon.

56-years-old Lisa Rinna is married to Harry Hamlin. The couple has been married for over 22 years since the 29th of March 1997. Together they have two daughters named Delilah Belle and Amelia Gray. Lisa is also a stepmother to Hamlin’s son from the previous relationship. Prior, Hamil was married to Nicollette Sheridan and Laura Johnson.

Apart from that, she has also been in relationships with Todd Nelson and Peter Barton.