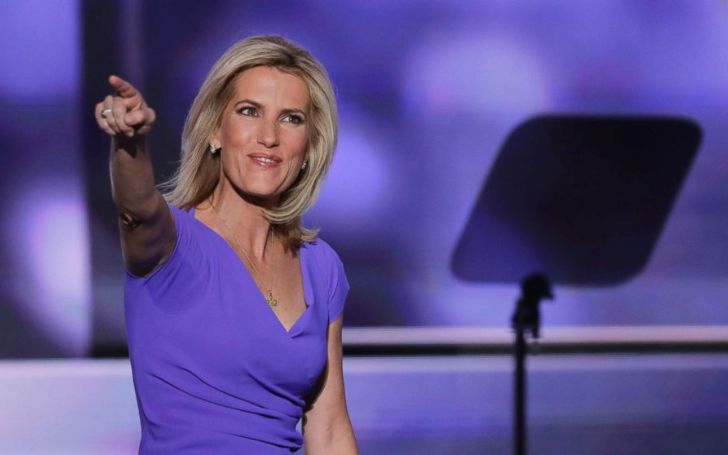 Laura Ingraham, born as Laura Anne Ingraham, is an American TV host by profession. She previously worked as the host of the nationally syndicated radio show The Laura Ingraham Show.

Likewise, she also initially worked as the editor-in-chief of LifeZette. And since 2017, she is the regular host of The Ingraham Angle, which airs on the Fox News.

While her parents grew up in America, her maternal grandparents were Polish, who has immigrated to the US. Likewise, her father belonged to Irish and English ancestry.

Talking about her education, she finished her graduation in 1981 from Glastonbury High School. Similarly, she achieved a B.A. from Dartmouth College in 1985. Later, she received a Juris Doctor degree in 1991 from the University of Virginia School of Law.

Over a period of time, Laura has served in different professions. She began her career as a speechwriter in 1980, in the Reagan administration for the Domestic Policy Advisor.

Following this, she served as The Prospect’s editor; “The Prospect’ is a magazine that was officially issued by Concerned Alumni of Princeton.

Eventually, she went on to work as the clerk for Judge Ralph K. Winter Jr., of the U.S. Court of Appeals. There after she was employed at as an attorney at the New York-based law firm Skadden, Arps, Slate, Meagher & Flom before she made it big at the Fox News.

Besides her career as a journalist, she has also written several books. She is the writer of The Obama Diaries that was published on July 13, 2010.

Her other books include, Shut Up & Sing, Power to the People, Of Thee I Zing: America’s Cultural Decline from Muffin Tops to Body Shots, Can Donald Trump Make America Great Again? The Munk Debates, and many other.

Beginning to talk about Ingraham’s personal life, she is a Roman Catholic at present, however, she attended a Baptist church until the age of twelve.

Besides, she also suffered breast cancer which is completely cured at present. She revealed that she had underwent the treatment of breast cancer in April 2005.

She is not married at present, but is the single-mom of three children, Nikolai Peter Ingraham, Michael Dmitri Ingraham, Maria Caroline Ingraham, which are all adopted.

She Has Dated a Few Man In The Past

While she is not married so far, she has been in a few relationships in the past. When she was in college, she reportedly dated American-Indian author Dinesh D’Souza.

Likewise, in the year 1999, she had a brief relationship with American politician Robert Torricelli.

What is Laura Ingraham Net Worth in 2022?

As of 2022, Laura owns a net worth of $75 Million. A major portion of her net worth is primarily is an outcome of he career in journalism.

In fact, as per Celebrity Net Worth, her annual salary sits at $15 Million.