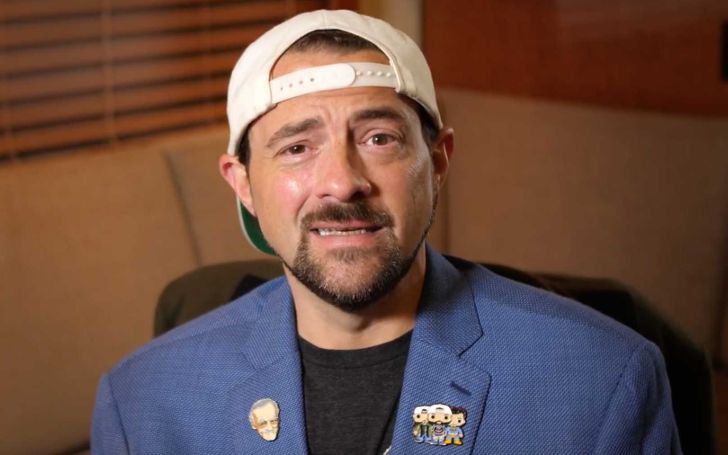 How Rich Is Director Kevin Smith?

Kevin Smith is a popular film director who has been a part of the film industry for almost three decades. Besides that, he is also a public speaker, writer, and podcaster. He grabbed the limelight for writing, directing, co-producing, and acting in the movie Clerks.

Similarly, Kevin’s notable work credits include films like Red State, Cop Out, Dogma, Chasing Amy, Mallrats, Jay and Silent Bob Strike Back, and others. Also, Smith is an owner of a comic book store, Jay and Silent Bob’s Secret Stash.

Purchased A House In Los Angeles

American multi-talented star Kevin Smith began his career in 1992. He tasted the fame after two years, when he directed, wrote, acted, and co-produced in Clerks with Scott Mosier. The movie became an instant hit, and he became an overnight sensation.

Additionally, two years later, he starred with Joey Lauren Adams, Jason Lee, Dwight Ewell, and Jason Mewes in Chasing Amy. Likewise, he then made a film, Dogma, which was one of the commercially successful movies of 1999.

Some of his film’s earnings are listed below:

Furthermore, Kevin’s recent work credits include Yoga Hosers, Holidays, and Jay and Silent Bob Reboot. Also, he is all set to come back with his upcoming 2020 films Kilroy Was Here and Clerks III.

Did You Know: In 2019, the Library of Congress preserved Kevin’s movie Clerks in the National Film Registry for being “culturally, historically, or aesthetically significant”.

49-year-old Kevin has been writing books and comics since childhood. He is an owner of a comic book store, Jay and Silent Bob’s Secret Stash in Red Bank, New Jersey. Smith bought the original store with the amount earned from Clerks for $30,000 in 1997.

Some of his popular comics are Clerks, Spider-Man/Black Cat: The Evil that Men Do, Batman: Cacophony, Green Hornet, Hit-Girl in Hollywood, and others.

Additionally, Clerks writer also wrote the books such as Silent Bob Speaks, My Boring Ass Life: The Uncomfortably Candid Diary of Kevin Smith, Shootin’ the Sh*t with Kevin Smith, and Jay and Silent Bob’s Blueprints for Destroying Everything.

Moreover, the American director is also a podcaster. Altogether, he has nine podcasts which include Fatman on Batman, Hollywood Babble-On, Jay & Silent Bob Get Old, ThatMan on Fatman, That Kevin Smith View Askew Review, and others.

Interesting Fact: Jay and Silent Bob’s Secret Stash owner wrote several drafts on a script for a planned Superman movie doubtfully titled Superman Lives. However, Smith dropped from the film after Tim Burton brought his own team for writing when he was hired.

One Of The Supporters Of “Rape, Abuse & Incest National Network”

Moreover, he also helps the foundations like Declare Yourself, Food Bank For New York City, The Lunchbox Fund, and The Wayne Foundation. Likewise, these organizations are also supported by stars like Beyoncé, Bill Gates, Maggie Gyllenhaal, and others.

His father, Donald E. Smith, is a postal worker whereas his mother, Grace Smith is an actress. Similarly, he has two older siblings, brother, Donald Smith, Jr., and sister, Virginia Smith.

New Jersey-born Kevin Smith has been married to actress Jennifer Schwalbach Smith since April 25, 1999, at Skywalker Ranch. The couple first met when Jennifer was scheduled to interview Smith for USA Today.

The couple welcomed their daughter, Harley Quinn Smith on June 26, 1999. The name of their child was kept after the character from the Batman comics.

Prior to this, Kevin dated actress Joey Lauren Adams. He even shared his desire to marry his then-girlfriend in Time magazine. The duo also worked together in the film Chasing Amy. They separated in June 1997.

Suffered From Heart Attack In 2018

Chasing Amy director had not used cigarettes until his debut film; however, later became the chain-smoker. He finally stopped smoking after using cannabis after he worked with Seth Rogen on Zack and Miri Make a Prono in 2008.

Later, the podcaster took out sugar from his diet and took up juice fasts after he watched Fed Up in 2014. During that time, he was 150 kg, and he reduced his weight to 110 kg.

Kevin got a heart attack while he was performing at Alex Theatre on February 25, 2018. The reason behind the attack was a total blockage of the left anterior descending artery. He was immediately assailed to the Glendale Adventist Medical Center, and after emergency surgery, he was finally recovered.

Smith was told to reduce another 23 kg and started having a single plant-based food that includes potatoes without salt for a couple of weeks. Then, he began eating a vegan diet.

After that, American director Adam Rifkin suggested to him the diet of magician Penn Jillette. Penn followed his weight reduction diet after his health scare in 2015. With Penn’s plan, Smith was able to lose 7.7 kg within nine days.

Again, he reduced 26 kg after eight months and was 90 kg from 116 kg. Moreover, he then joined the company Weight Watchers and served as a paid spokesperson. As of January 2020, he has been maintaining a vegan diet.