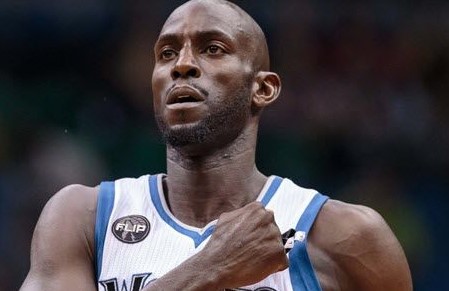 At the time of retirement in 2016, Garnett was considered the highest player in the NBA history, with total on-field career earnings of $334.304 million.

According to Celebrity Net Worth, the 43-year-old retired NBA star has a net worth of $120 million as of April 2020.

Indeed, the massive contracts & salary from the NBA career grabbed him a hefty sum. Furthermore, his off-court ventures aided his earnings; from endorsements with Anta Sports Products & Zico, Kevin made $5 million a year.

Is Highest-Earning NBA Player Of All-Time

Reportedly, his richest NBA contract was the 6-year-deal valued at $126.0163 million, signed on October 1, 1997, with Minnesota Timberwolves.

The Greenville, South Carolina-born NBA player earned his career-high salary during the 2003- 2004 season with a value of $28 million.

Did you know? Kevin Garnett was a member of the United States National Team in 2000 Summer Olympics & won a gold medal in FIBA (his first & only appearance in FIBA). He averaged 10.8 points, 9.1 rebounds and 2.1 assists per game.

While attending Mauldin High School in Mauldin, Kevin got wide recognition for his prominent basketball play & later, enrolled at the Farragut Career Academy in Chicago.

Thereafter, following his stints in other NBA teams: Boston Celtics & Brooklyn Nets, Kevin returned to Minnesota Timberwolves and signed a 2-year $16.5 million contract on July 9, 2015, and retired a year later.

Here is the list of Kevin Garnett’s contracts in NBA:

Interesting Fact: Throughout his career, Kevin Garnett paid $339,561 in fines, that includes his highest-ever fine of $109,091 for headbutting Dwight Howard, while playing for the Nets, against the Rockets.

What Are Kevin’s Major NBA Achievements?

While Garnett retired from the NBA in 2016, he already set many records; the NBA star was the first player to win NBA Player of the Month Award for 4 times in single-season (2003- 2004).

Moreover, the 6 ft. 11 inches tall basketball player is the only NBA player averaging 20 points, 10 rebounds and 4 assists per game throughout 9 consecutive seasons.

After retirement from playing career in NBA, Kevin joined the TNT’s Inside the NBA in October 2016 & briefly, hosted his own segment named Area 21.

Also, he worked in the 2019 crime-thriller film Uncut Gems starring Adam Sandler and Idina Menzel; the movie grossed $50 million over the budget of $19 million.

Formerly, when the NBA star owned a house in Wayzata, Minnesota.

However, the sales report of the property never became official.

Furthermore, as reported, the NBA star has another house in Malibu, California, bought in 1997 for $3.595 million.

It reportedly had price cuts for 3 times that totaled $851,000, before the sales.

In September 2018, the now-retired NBA star filed a lawsuit against his accountant Michael Wertheim & the latter’s firm Welenken CPAs.

In the lawsuit, Kevin claims that his accountant didn’t tally his bank records, even after the NBA player’s wealth manager Charles Banks IV defrauded him $77 million.

As per Forbes, Banks, in 2016, faced 4 years in federal prison after defrauding $6 million to NBA player Tim Duncan.

Kevin Garnett claims that Wertheim & Banks jointly worked in the fraud as they limited him to his own money; they stated Kevin was in financial trouble when he asked to withdraw $40,000, but at the same time, Banks withdrew $2 million from Kevin’s account.

Kevin Maurice Garnett was born on May 19, 1976, in Mauldin, South Carolina, the USA. He is 2nd of 3 children of Shirley Garnett and O’Lewis McCullough; as for a fact, Kevin’s parents never married & split shortly after his birth.

Along with 2 sisters: Sonya and Ashley, Garnett was raised by his mother & step-father Ernest Irby. Also, he has a half-brother Louis McCullough, a former basketball player.

Father Of 2 With Estranged Wife

Kevin married his longtime girlfriend-turned-wife Brandi Padilla in July 2004 in a private ceremony in California. Together, they became parents to 2 daughters: Kapri and Kavalli.

However, after 14 years of marriage, Brandi filed for divorce in July 2018.

As per court documents, Garnett’s wife demands for custody of both children & even more seeks spousal support.

As of April 2020, the divorce is yet to be finalized. Meanwhile, Kevin Garnett is allegedly single.