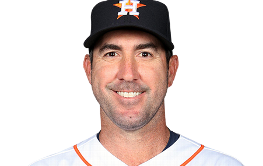 Justin Verlander, an American baseball pitcher turned professional in 2004, currently plays for the MLB team Houston Astros since 2017. Verlander saw a contract extension of 2 years with Astros in 2019 & will be playing with the team throughout 2021.

The 8-time All-Star & one time World Series Champion (2017), Justin’s career began as a draft of Detroit Tigers in minor leagues & then made MLB debut in 2005.

How Much Is Justin Verlander’s Net Worth In 2020?

Professional for over 15 years, Justin made a hefty sum through MLB career: contract & salary along with endorsements. According to Celebrity Net Worth, 37-year-old Justin Verlander has a net worth of $95 million as of April 2020.

In 2019, the Forbes estimated his annual revenue at $29.5 million along with $1 million in endorsements; Verlander has a promotional deal with Breitling, GlaxoSmithKline, Rawlings, Supercuts, Under Armour & USAA.

The Manakin-Sabot, Virginia-born MLB star started with a base salary of $316,000 in the rookie season & is currently on a 2-year contract worth $66 million throughout 2021.

In the 2015 & 2016 season, Justin made his career-high salary of $28 million, thanks to his richest contract ever, a 7-year extension worth $180 million with the Detroit Tigers.

As for a fact, his wife Kate Upton, an American model & actress has a net worth of $20 million currently.

The attendant of The Richmond Baseball Academy, Justin enrolled at Old Dominion University; there, he played as an amateur averaging 1.5 strikeouts per nine innings.

Moreover, in 2003, Verlander pitched for USA National Baseball Team & led them to a Silver medal at Pan American Games.

Initially, he played in minor leagues for Lakeland Flying Tigers (A+) and the Erie SeaWolves (AA), both affiliates of Tigers & later made MLB debut on July 4, 2005.

Here are the MLB contracts signed by Justin Verlander:

Reportedly, the extension contract with Houston Astros for 2 years, will see him a salary of $33 million each for the 2020 & 2021 season.

With 15 seasons in MLB, Justin Verlander has played for 2 teams: Detroit Tigers & Houston Astros. In 2017, with the Astors, he became the World Series winner & was the 2017 League Championship Series MVP.

His career stats as of April 2020 reads:

Lives With Wife In Beverly Hills

Currently, Justin lives with his girlfriend-turned-wife Kate Upton, an actress & model, in their house in Beverly Hills, California.

The couple bought the 5-bedroom & 6-bathroom East Coast country-style property for a reported $5.25 million in December 2016.

Over the years, the property has been under the hands of many celebrities; in 1998, saxophonist Kenny G sold it to Tennis star Pete Sampras for $2.5 million.

Thereafter, Sampras sold it to film producer Jon Peters in 2004 for $3 million, before it came into the market.

What Cars Does Verlander Drive?

In 2016, Verlander founded Wins For Warriors Foundation, a non-profit to empower military veterans & has donated over $1 million to the cause.

With the foundation, the MLB player raised funds of $246,311 to recover Houston from Hurricane Harvey in 2017.

Furthermore, on April 4, 2020, Justin & his wife Kate announced via Instagram to donate the MLB star’s paycheck to a different charity working for relief programs on COVID-19.

Justin Verlander is in a marital relationship with his actress & model wife Kate Upton. The duo began dating in early 2014 & got engaged 2 years later, in 2016.

Thereafter, on November 4, 2017, he & Kate got married in a medieval church in Tuscany, Italy. As for a fact, their wedding took place just 2 days after Justin won the 2017 World Series with the Houston Astros.

On July 14, 2018, the couple announced about Kate’s pregnancy & welcomed daughter Genevieve in November 2018.

Justin Brooks Verlander was born on February 20, 1983, in Manakin-Sabot, Virginia, the USA, to Richard and Kathy Verlander.

He has a younger brother Ben Verlander, who played for Detroit Tigers affiliateas outfielder & was released on June 23, 2017.