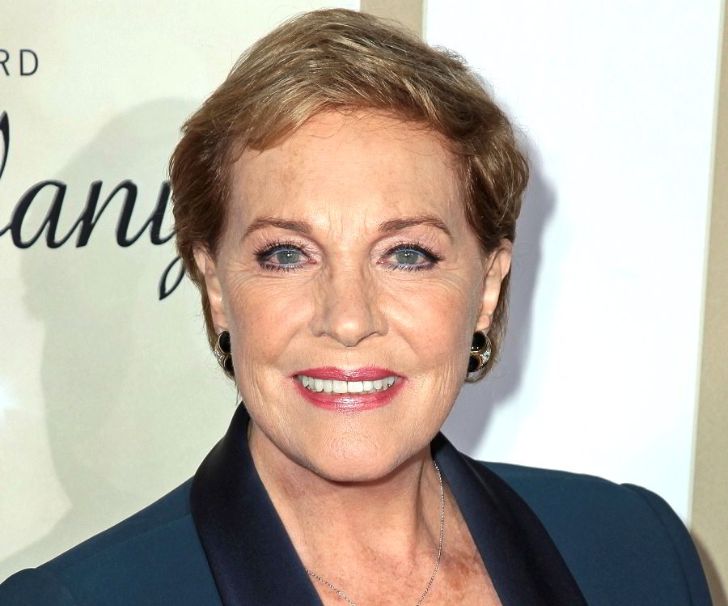 Julie Andrews, an English actress, singer & author won an Academy Award through her feature film debut in Mary Poppins (1964). Professional since 1945, Andrews’ journey as a child actor to broadways & then to on-screen career earned her wide fame; she is the winner of 5 Golden Globes, 2 Primetime Emmy, and 3 Grammy Awards.

Since the 90s, Julie’s engagement in the acting industry is quite less; rather, she now focuses on voice-overs & has voiced for the hit-animated movies like Shrek 2 (2004), Enchanted (2007) and Despicable Me (2010).

Grew Up In A Poor Family:  Parents Divorced After Mother’s Extra-Marital Affair

Julie Elizabeth Wells (later changed surname to Andrews) was born on October 1, 1935, in Walton-on-Thames, Surrey, England, the UK. According to her 2008 autobiography Home, her mother Barbara Ward Wells (1910-1984) had an affair with a family friend & resulted in her birth. In 1950, Andrews knew about her true parentage from her mother.

Her father Edward Charles “Ted” Wells (1908-1990) was a teacher of metalwork & woodwork. In 1939, during the outbreak of World War II, Julie’s parents divorced & then married again with their respective spouses.

Reportedly, the Andrews family was poor & lived in a bad slum area of London. From her mother’s side, she has a brother Christopher Stuart (b. May 1946).

Andrews has been married 2 times & is the mother of 5 children (2 adopted & 2 step-children). The recipient of the 2011 Lifetime Achievement Grammy, Julie Andrews firstly was in a marital relationship with set designer Tony Walton from May 10, 1959, until their divorce on November 14, 1967.

While together, Julie and Tony welcomed daughter Emma Katherine Walton on November 27, 1962.

The duo remained together as husband-wife for 31 years until Edward died on December 15, 2010.

From her biological daughter Emma, Andrews is grandmother to 2 grandchildren: Sam (b. 1996) and Hope (b. 2003). From adopted daughter, Amy Edwards, she has a grandson Max Scheff while with her other adopted daughter Joanna has 3 children.

Andrews’ stepdaughter Jennifer has 2 kids: Kayti and Hannah Schneider; and her step-son Geoffrey is father to Isabelle and Hank.

At the age of 13, Andrews was the solo performer & the youngest one to appear in Royal Command Variety Performance before King George VI and Queen Elizabeth at the London Palladium in 1948. In 1954, she made her Broadway debut through The Boy Friend and later appeared in My Fair Lady (1956) and Camelot (1960).

Julie made her feature film debut in 1964 from the musical fantasy Mary Poppins, portraying the title character and shared the screen with Dick Van Dyke, David Tomlinson, Glynis Johns & Karen Dotrice. Along with $103.1 million in the box-office, the movie earned Andrews an Academy Award in 1965.

By the 90s, her on-screen appearance decreased; after appearing in the 1991 films A Fine Romance and Our Sons, it was a decade later in 2001, when Julie made a feature appearance in 2001 movie The Princess Diaries.

Ever since, Julie Andrews focuses mainly on voice-over & has worked in:

The 5 ft. 7 inches tall actress is set to voice Marlena Gru in the 2021 film Minions: The Rise of Gru.

In 1997, Julie Andrews underwent throat surgery at Mount Sinai Hospital in New York to remove non-cancerous nodules after she developed hoarseness in her voice. However, the surgery malpractice left her with permanently damaged singing voice & even more, ruined her speaking voice.

She filed a suit against the doctors at Mount Sinai Hospital in 1999, which September 2000. As per The London press, the settlement sum for Julie Andrew’s botched surgery was $30 million (US) or £21 million.

According to Celebrity Net Worth, 84-year-old Julie Andrews has a net worth of $50 million as of May 2022. Without a doubt, the major source of her income in the acting career journey since 1945; she records 47 acting credits so far.

Here is the list of her salary from movie works:

Reportedly, after MGM canceled their proposal of Irving Berlin musical biography Say it With Music in 1969, Andrews filed a lawsuit against them & received the promised payroll of $1.25 million.