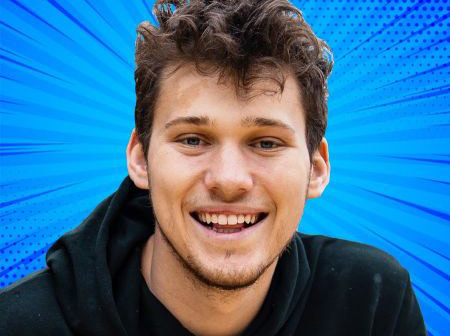 JesserTheLazer was born as Jesse Riedel on March 27, 1999, in Los Angeles, California, the United States of America, under the zodiac sign Aries.

The names of his parents have not been disclosed but Jesser has featured his mother in his several YouTube videos. He was raised in Los Angeles, along with his brother James Riedel whom also he has featured in his videos.

JesserTheLazer created his channel titled JesserTheLazer, which is now Jesser with more than 3.02 million subscribers, on July 9, 2012, and he uploaded his first video on August 14, 2013.

He then started posting real-life NBA videos and after a period of time, he started playing NBA video games on the channel. Two of his most-viewed videos are ‘Epic Indoor Mini basketball challenges’ and ‘House 2 V 2 Mini basketball- Gone Wrong Broken Wall.’

Jesser is good friends with several fellow basketball gamers including YouTuber Cash Nasty against who he once competed in NBA 2K game.

He also runs a second channel ‘JSR’ where he uploads content related to Fortnite Battle Royale. He created the channel on March 9, 2014, and it has more than 975 subscribers, as of 2020.

Moving towards the relationship status of JesserTheLazer, the gamer is currently dating an Instagram star Iman Awann. She has more than 98.3 thousand fan followers on the social media platform.

The couple started dating in 2018 and they are enjoying a romantic relationship ever since. The boyfriend-girlfriend duo often posts photos with each other on their Instagram accounts.

Iman is a Minecraft game addict while Jesser is an avid Los Angeles Clippers fan.

JesserTheLazer has a decent amount of money throughout his YouTube and gaming career. According to numerous online sources, the Internet personality has an estimated net worth $2 million.