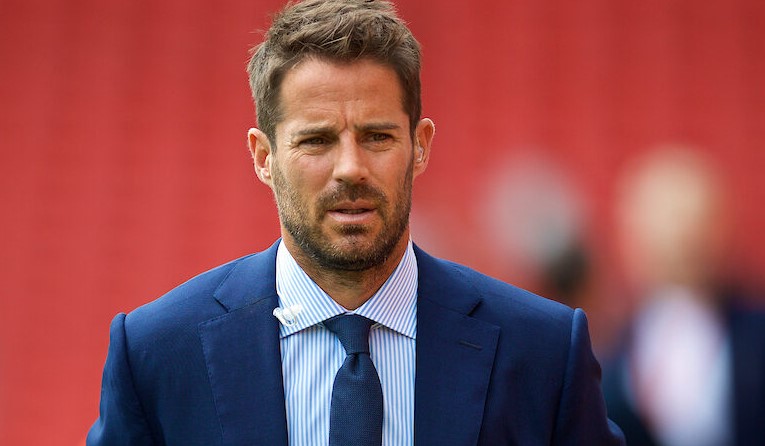 Former professional footballer Jamie Redknapp, 48, is worth $25 million as of 2022. Throughout his career, Redknapp played for Bournemouth, Southampton, Tottenham Hotspur, and Liverpool, where he was the captain as well.

Redknapp played for Liverpool for about 11 years in more than 237 league games. He is also involved in the win of the 1995 Football League Cup Final. Currently, Jamie is a pundit at Sky Sports and an editorial sports columnist at the Daily Mail.

Jamie Frank Redknapp was born on 25th June 1973 in Barton on Sea, England to father Harry Redknapp, and mother, Sandra Harris. He is English by nationality and has white ethnic descent.

Redknapp grew up alongside his older brother Mark who is a model. He went to Twynham School, located in Christchurch. During his high school, he began playing in the Sunday league youth teams along with his brother.

He began his career at Tottenham Hotspur as a youth player. However, Jamie turned down their offer to play for Bournemouth under his father, Harry Redknapp, who was the manager at that time.

Jamie made 13 appearances for the club before Liverpool’s attention, who later signed him on 15th January 1991. At the age of 17, Jamie was paid £350,000, i.e. $452,690, and became one of the most expensively signed teenagers in English football around that time.

Frank was one of the last players to be signed by manager Kenny Dalglish before his resignation on 22nd February 1991. He was the youngest Liverpool player to appear in a European competition at the age of 18.

He made his club debut against Auxerre in the UEFA Cup on 23rd October 1991 and made his first goal for the club on 7th December 1991 against Southampton at the Dell.

On the field, Jamie established himself as a critical midfielder when Roy Evans managed at Anfield. His game revolved around being a central midfielder with a very high level of ability to create space in tight situations.

Redknapp helped the club back into the top three of the FA Premiership; however, his knee injury curtailed his involvement in the 2000-01 season. Jamie made his comeback from the injury during the pre-season tour before the 2001-02 season.

Throughout his time in Liverpool, he played about 308 times and scored 41 goals.

Following his departure from the team, Redknapp began his career as a studio-based pundit on BBC during the European Championships in 2004. In 2010, Jamie was named the host and mentor on the Sky1 show Football’s Next Star.

As of now, he is a team captain in the Sky1 sports game show titled A League of Their Own.

How Much Has He Earned To Date?

According to Celebrity Net Worth, Jamie Redknapp is worth $25 million as of November 2022. He amassed most of his fortune from his successful career as a professional footballer.

Where Does Jamie Live?

Previously, Redknapp resided in Mallorca along with his ex-wife singer Louise and children. They sold their Mallorca mansion for £5,000,000, which is $6,405,000.

Following his divorce with Louise, Jamie was reportedly dating model Lizzie Bowden. The pair were often seen together in public places. However, as per sources, they separated their ways as Jamie decided to put his family first.

Jamie and Louise filed for divorce after 19 years of marriage in mid-2017. Their marriage was officially ended on 29th December 2017.