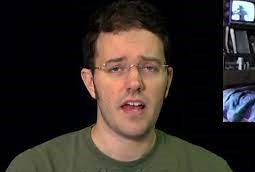 Creator of Angry Video Game Nerd, James Rolfe is an American actor, filmmaker, film/video game critic, and internet personality. He is best known for his game reviews on the online video platform YouTube.

Rolfe has created over 270 films including shorts. The 39-year-old filmmaker rose to the spotlight in 2004 when he started the Angry Video Game Nerd. Most of his videos are uploaded on his YouTube channel called Cinemassacre. As of 2022, James Rolfe owns an estimated net worth of $ 2 Million.

During his early teen years, he ran an annual ‘haunted house’ Halloween attraction out of his parent’s garage which was later used as a graveyard for his horror-comedy film The Deader, the Better.

In May 1996, Rolfe filmed A Night of Total Terror in his backyard which eventually became the turning point of his life. He went to create films like You Know What’s Bullshit?, Death Suit, Death Seen, and Death Secret.

Rolfe grabbed public and media attention in May 2004 when he filmed a five-minute short review of the game Castlevania II: Simon’s Quest by Nintendo Entertainment System under the name “Bad NES Games”.

His videos were often kept private until 6th April 2006, when his friend and collaborator Mike Matei convinced him to post the videos on a YouTube channel called JamesNintendoNerd which is now known as Cinemassacre.

On 12th September 2006, James’ character rose to the spotlight when his review of Teenage Mutant Ninja Turtles became viral on his YouTube Channel.

Some of his other film work credits are The Mexican Mummy, His Name Was Jason, Never Sleep Again: The Elm Street Legacy, Plan 9, and Shooting Clerks.

His ongoing web series are James & Mike Mondays and Rental Reviews. In a similar way, his upcoming film work includes In Search of Darkness where he will appear as himself.

Moreover, his endorsement deals and ad campaigns also aid up a decent sum of money to his riches.

James Duncan Rolfe was born on 10th July 1980 in Haddonfield, New Jersey, the United States of America. He holds American nationality and has an Italian ethnic background.

Rolfe was brought alongside his sister Gina by his parents Marlene Rolfe and Scott Rolfe.

Rolfe went to local high and later enrolled at the University of the Arts from where he earned his bachelor’s degree in fine Arts in 2004.

Is James Married To Anyone?

James Rolfe tied the knot with his girlfriend turned wife April Chmura in November 2007. The couple first met in July 2004 while he was working as a cinematographer on the early Nerd episodes.

The duo eventually fell in love and exchanged their wedding vows in midst of their family and friends. Together they share two daughters born in 2013 and 2017 respectively.