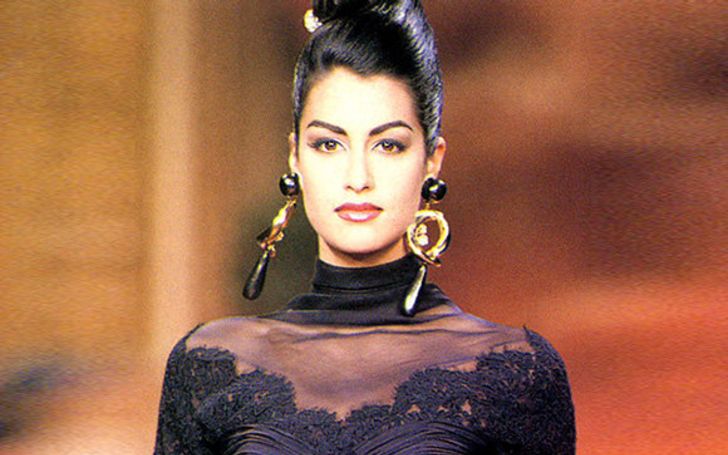 Canadian model, Yasmeen Ghauri is very famous for her works with popular designers such as Hermes and Lanvin. She has been featured on the cover page of several magazines, Italian Vogue, Elle Magazine, and so on. Well, she is the first South Asian to become a Victoria’s Secret Angel and appear on Vogue.

During her time, she ruled over the modeling industry. But, the gorgeous looking model took the decision to give up her career while she was in her peak just for the sake of her family.

Yasmeen Ghauri was born to a Pakistani father Moin Ghauri and German mother, Linda in Montreal, Quebec. While she was working at the McDonald’s in 1989, she was discovered by hairdresser and artistic director of Platine Coiffure, Edward Zaccharia.

Defying the objection of her father, Yasmeen started her modeling career. As a model, she helped shape the new fashion industry.

Despite the obstruction, she decided to choose her modeling career and participated in modeling premiere in Milan and Paris. In 1990, she moved to New York. Her first cover shots were for Elle in 1990. She also became the cover page of Valentino Couture, Anne Klein, Versace, Chanel, Jil Sander, Christian Dior.

While she was in her peak, she worked with the biggest fashion labels such as British Vogue ad Harper Bazaar. She also signed the contract with Victoria’s Secret in 1992. However, she took retirement from her career in 1997.

Why Did She Retire?

In the year 1997, she officially retired from her modeling career after she became pregnant with her first child. After the birth of her daughter, Maia she got married to her longtime boyfriend, Ralph Bernstein. Later on, she welcomed her second child as a son named Vitor. Since then she became busy taking care of her family and thus, left the modeling field.

The 49 years old Yasmeen Ghauri shared the wedding vows with Ralph Bernstein in the late 90s after the birth of their first daughter, Maia. Prior to tying the knot, they were in a dating relationship for a long time. Later on, they welcomed a son named Victor.

As of now, she resides in New York with her husband and kids. Since she has taken the retirement, she has preferred to keep her personal life to herself.

Later on, she received her degree in business and started her career in law. Currently, she is a very active social worker who has been working to fundraise for breast cancer research and environmental causes.