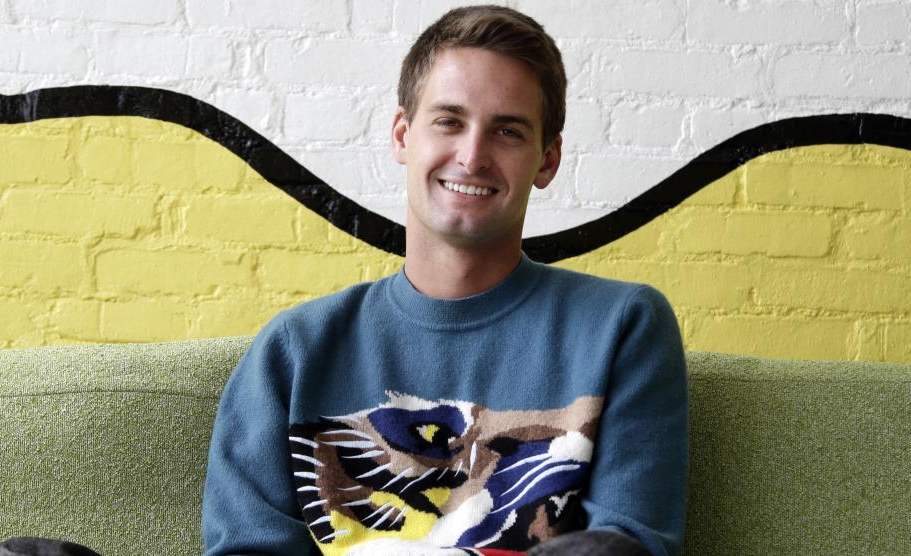 Evan Spiegel, a French-American businessman is the co-founder of the social media company Snap Inc. (formerly Snapchat Inc from 2011 to 2016) with Bobby Murphy and Reggie Brown (was out after some time of the company launch).

Currently, Spiegel serves as the CEO & Director of the company; he has 48% voting power while his partner Murphy has 47% rights, totaling the founders voting power of 95%.

With compensations from the company & his equity stake, the Los Angeles-born became one of the youngest tech billionaires (at age of 28) in 2018 as per Forbes andranks #225 in Forbes 400 2019.

Being the co-founder & CEO of Snap Inc., where the 29-year-old tech businessman owns 210,970,819 shares, is indeed the milestone to his career success.

After the company Snap Inc. went with IPO on March 2, 2017, it collected almost $30 billion in market capitalization on the first trading day.

Net Worth Over The Years:

While as a student at Stanford University, Evan along with his fellow classmates Bobby Murphy and Reggie Brown made a multimedia messaging app prototype “Picaboo” later named Snapchat in 2011.

On September 16, 2011, with Bobby Murphy, Spiegel founded Snapchat Inc. & raised $485,000 in its seed round funding & an undisclosed bridge-funding through Lightspeed Ventures.

Later, the social media company was re-branded as Snap Inc. on September 24, 2016, by the time, the company was worth $22 billion.

Lawsuit Against Snapchat Slipped Off $157.5 Million

In February 2013, Reggie Brown, who was forced out of the company soon after the launch of Snapchat, filed a lawsuit against Evan Spiegel and Bobby Murphy.

Brown claimed that Snapchat, originally “Picaboo”, was his concept & even designed the mascot logo for the initial selfie app.

The lawsuit stated that he didn’t get an equity stake of the company (one-third). It later settled on September 9, 2014, & the value of settlement amount was $157.5 million revealed through Snap’s SEC public filing on February 2, 2017.

Over the years, Snapchat’s stock business has become a highly sensitive concern in the media: from criticisms of Kylie Jenner & Rihanna to fierce competition with Facebook (FB) owned Instagram; that snatched away a chunk of the sum from the company.

The first downfall came in 2017 after Snapchat lost $3.7 billion– mainly cited on heavy expenses on compensations to the board.

In February 2018, one of the youngest self-made billionaire & cosmetic mogul Kylie Jenner made a Tweet stating she is no longer using the app criticizing its new layout.

The toll to the financial flow of Snapchat added after the Umbrella singer Rihanna commented on its offensive ad in March 2018, which swiped away the app’s $800 million.

Where Does Evan Spiegel Live & His Lifestyle?

Formerly, Evan Spiegel lived with his father in Pacific Palisades & later moved on his own at the age of 24, in November 2014, after buying a 3-bedroom house in Brentwood, Los Angeles, for $3.3 million.

In May 2016, with his girlfriend (now wife) Miranda Kerr, an Australian model, he bought another property in Brentwood for $12 million & lives there.

As reported, the property was in the market for $12.5 million, before the Snapchat co-founder acquired it for $500,000 less.

Regarding his lifestyle, Evan barely seems shy & is often in limelight for his costly expenses- though, seems a little piece in front of his billion-dollar fortune.

Spiegel drives a Ferrari and a owns a Lamborghini Huracan (that costs $261,274).

Reportedly, Evan and Kerr during their honeymoon on the private island of Laucala in Fiji & rented a mega-yacht costing $1 million-a-week to sail the coast of Italy and Greece.

Did you know? Spiegel has made $65 million of his Snap stock in a donation.

Evan Spiegel is in a marital relationship with Miranda Kerr, an Australian supermodel; they married on May 27, 2017, & are parents to 2 children: Hart Kerr Spiegel (born on May 7, 2018) and Myles Spiegel (October 2019).

As for a fact, Evan is 7 years junior to Miranda.

After his parents divorced, Evan began living with his father & drove a Cadillac. However, after his father refused to buy him a BMW 550i worth $75,000, Spiegel went to live with mother.

Born-American, Evan has a dual citizenship: he got French citizenship in 2018.

The Crossroads School for Arts and Sciences attendant later went to Stanford University. He also attended Otis College of Art and Design and Art Center College of Design.