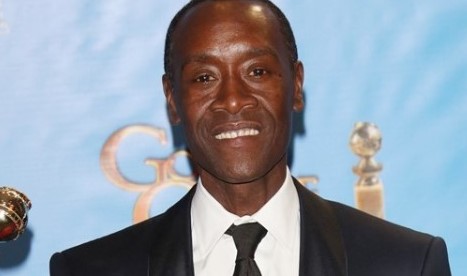 He is also popular for playing Rwandan hotel manager Paul Rusesabagina in the historical drama film Hotel Rwanda in 2004. From 2012 to 2016, he played Marty Kaan in the Showtime comedy series House of Lies for which he won a Golden Globe Award.

He went to Hartley Elementary School from 1970 to 1974 and later enrolled at East High School. During his high school days, he played saxophone in the jazz band and sang in the choirs. He graduated from East High in 1982.

According to Celebrity Net Worth, Cheadle’s net worth is estimated at around $35 million as of March 2020. He reportedly makes $150 thousand per episode for his role in TV series.

He reportedly earned $1 million for his role as War Machine in the 2010 film Iron Man 2 and $150 thousand per episode for his role in House of Lies.

Cheadle made his acting debut in 1984 as an Angel in 3 Days. The following year, he played Juicy Burgers Worker in a comedy film Moving Violations.

He then appeared in films and TV shows like Hill Street Blues, Hamburger Hill, Night Court, Colors, The Fresh Prince of Bel-Air, and several more. He made his breakthrough as Mouse Alexander in the 1995 film Devil in a Blue Dress and won a Best Supporting Actor Awards and the National Society of Film Critics.

Moreover, Don was nominated for the Primetime Emmy Awards for his outstanding work in The Rat Pack, A Lesson Before Dying, ER, and Things Behind the Sun.

In 2005, Don played Paul Rusesabagina in the drama film Hotel Rwanda alongside Sophie Okonedo, Joaquin Phoenix, and Nick Nolte. He was nominated for the Academy Award for Best Actor for his performance in the film.

In 2010, Cheadle replaced Terrence Howard for the role of War Machine or James Rhodes in the MCU film Iron Man 2. In the film, he co-starred alongside Robert Downey Jr., Gwyneth Paltrow, Sam Rockwell, and Scarlett Johansson.

In 2012, he joined the cast of the Showtime TV series House of Lies and played Marty Kaan alongside Kristen Bell, Ben Schwartz, Josh Lawson, and Dawn Olivieri. He appeared in the show for four years until 2016 and won the Golden Globe Awards for Best Actor in a Comedy Series.

In 2018, he guest-starred in the first season finale of DuckTales and voiced Donald Duck in the episode The Shadow War.

He is set to portray J.T. Roberts and Jeremiah Hamilton in his upcoming films Space Jam 2 and Prince of Darkness, respectively.

Donald began dating actress Bridgid Coulter in 1992. The couple is not married; however, they share two daughters named Ayana Tai (b. in 1995) and Imani (b. in 1997) together.

As per some online tabloids, the couple reportedly tied the knot in 2016 amidst family and friends in a low-key ceremony; however, the news is not confirmed by the duo. Don has called his long-time girlfriend “wife” several times in public and expresses his love for her.

Apart from his successful acting career, he has been involved in numerous charitable and philanthropic works. He is involved in several campaigns to end the genocide in different places.

He, along with Brad Pitt, Matt Damon, Jerry Weintraub, David Pressman, and George Clooney, co-founded the Not On Our Watch Project, which is an organization focusing on global attention and resources to prevent and stop mass atrocities.

On 13th December 2007, he and fellow actor George Clooney were presented with the Summit Peace Award by the Noble Peace Prize Laureates for their work to stop the genocide.

Some of the other charitable organizations which he supports are: