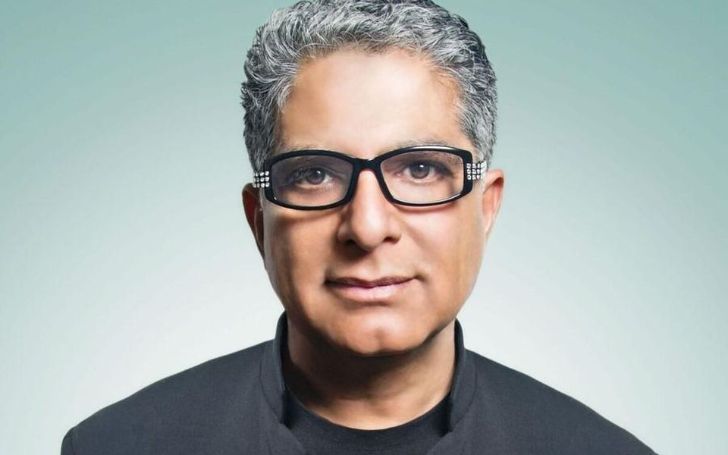 Indian-born American author, public speaker as well as a medicine advocate, Deepak Chopra is one of the experts in the field of mind-body healing. He started studying medicine in India and later on completed his education from Boston and started his career as a doctor.

Deepak Chopra was born on October 22, 1947, in New Delhi, British India to Krishan Lal Chopra (cardiologist) and Pushpa Chopra. His father was the head of the department of medicine as well as cardiology and worked for 25 years at New Delhi’s Moolchand Khairati Ram Hospital.

He grew up along his brother, Sanjiv Chopra who is a medicine professor at Harvard Medical School.

Regarding education, he joined St. Columba’s School. After the completion of his school level, he joined the All India Institute of Medical Sciences and completed his degree in 1969.

He later moved to the US where he studied residencies in internal medicine and endocrinology. He traveled to Sri Lanka to take the Medical Association Exam since the Indian government banned Indian doctors from sitting for the American exam. After passing the exam, he again went to the US for a Clinical Internship program at Muhlenberg Hospital in Plainfield, New Jersey.

After the completion of the degree, he received a license to practice medicine in Massachusetts in 1973. Following this, he started to teach at the medical schools of Tufts University, Boston University, and Harvard University.

In 1980, he became the chief of staff at the New England Memorial Hospital (NEMH). A year later, he met the head of the Indian Council for Ayurvedic Medicine, Brihaspati Dev Triguna who advised him to look into Ayurvedic practices. He joined Transcendental Meditation, and in 1985, its leader, Maharishi Mahesh Yogi asked him to begin an Ayurvedic health center.

He resigned from NEMH stating that the main reason was his disenchantment with Western medicine which prescribed too many drugs.

Apart from such achievements, he also coined the term, ‘Quantum Healing.’ It is believed that with Quantum Healing, using quantum mechanical means, a person can correct his health imbalance. Deepak also believes that quantum phenomena can affect the health and wellbeing of a person. For its justification, the man has tried to mix Ayurveda and quantum mechanics together.

A decade later, he was officially a California medical practitioner, who joined hands with the Scripps Memorial Hospital in La Jolla, California. Besides, he is also the owner of the Mind/Body Medical Group at the Chopra Center. The organization offers not only medical treatments but also Ayurvedic treatments.

He also entered philanthropy with his Chopra Foundation in 2009 which helps promote and research alternative health.

He has published more than 75 books and among then, 21 of his books are bestsellers. His book has been translated in several languages. Some of his best-selling books include The Book of Secrets: Unlocking the Hidden Dimensions of Your Life,   Happiness, and Spiritual Well-Being, Perfect Health: The Complete Mind/Body Guide, Super Brain: Unleashing the Explosive Power of Your Mind to Maximize Health and The Seven Spiritual Laws Of Success.

How Much Is The Net Worth Of Deepak Chopra?

From his long time career in several fields, he has collected $150 million.

Currently, he resides in a $14.5 million mansion in Manhattan. He bought the health-centric mansion which has been made on 3,663-square-foot land featuring three bedrooms and two and a half bathrooms.

The 76 years old, Deepak Chopra is married to Rita Chopra. The couple shared the wedding vows in 1970.

Together the couple shared two children: Mallika Chopra and Gotham Chopra. He is also the grandfather of three grandchildren.

His statement regarding the healing of human beings via Ayurveda and Quantum Mechanisms became a huge criticism and most of the people also said that he was letting sick people die without providing them medical treatment.

Quantum is actually a physics word and the word’s usage as a metaphor in medicine angered a number of Physicists. Now, he is referred to as the controversial new age guru.