Skip to content
Home » GOSSIP » Celebrities To The Rescue!! List Of Hollywood A-listers Who Donated To Australia Bushfire Victims

Celebrities To The Rescue!! List Of Hollywood A-listers Who Donated To Australia Bushfire Victims 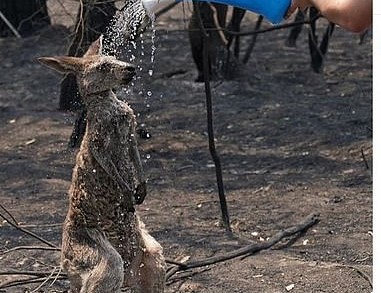 Global warming is the long-term rise in the average temperature of the Earth’s climate system. It is the major aspect of climate change and has been demonstrated by measurements of various effects of warming by direct temperature measurements.

But most importantly, global warming and climate change are mainly human-caused increases in global surface temperatures. As per the Intergovernmental Panel on Climate Change Fifth Assessment Report concluded,

“It is extremely likely that human influence has been the dominant cause of the observed warming since the mid-20th century.”

Global warming has been hampering places like Antarctic, Arctic, oceans, seas, and forests all around the world. In a similar way, one of the main causes of global warming is bushfires.

One Of The Largest Bushfires of All Time: Australian Bushfires

Recent bushfire in Australia has made a great impact in extensive areas across the country, causing huge property damage and deaths of millions of animals as well as humans.

The 2019-20 Australian bushfire season involves a series of bushfires that are currently burning across Australia. The current bushfire season is notably intensive compared to previous seasons as it has burned an estimated 8.4 million hectares land, destroyed over 2,500 buildings, and has killed about 28 people as of 8 January 2020.

As per reports, nearly half a billion wildlife in New South Wales were affected by the raging fires. Similarly, animals like bats, koalas, kangaroo, amphibians, and invertebrates put the number killed at over a billion.

Since September 2019, fires in Australia have been heavily impacting various regions of the state of New South Wales, Mid North Coast, the North Coast, the Hunter Region, the Hawkesbury, the Wollondilly, the Blue Mountains, the South Coast, and Illawarra with over 100 fires burnt across the state.

When & How Did It Happen?

Bushfires can be triggered by natural causes such as lightning. However, most of the time by man-made events such as arcing from overhead arson, accidental ignition in the course of agricultural clearing, campfires, cigarettes and dropped matches.

As per political and social debate, conservative politicians and media blamed a lack of prescribed burning and fire break management for the bushfires. On the other hand, a likely contributor to the bushfire crisis was the ongoing drought in eastern Australian (the most severe on record for some fire-affected areas).

Consequences And Effects Of Bushfires

According to various researchers, global warming is making bushfires burn more intensely, and it is believed that the current fires have already released about 350 million tonnes of carbon dioxide (two-thirds of Australia’s average annual carbon dioxide emissions) in just pact three months.

As the worse bushfire of the decade hit Australia a few months back, prompting celebrities from all around the world, have shown their support to the public and country with their donations. They also took advantage of their platforms and encouraged their fans to donate as much as they can.

Fundraising events and efforts have been increasing each day as Australia’s plea for help is being heard by people all around the world.

Australian power couple Keith Urban and Nicole Kidman took to Instagram and said that they were donating $500,000 to the Rural Fire Services and also posted links to the respective websites for her fans.

The 28-year-old American singer-songwriter Selena Gomez donated $500,000 to the victims of bushfire. She also shared a website link to her 164 million Instagram followers and encouraged her fans to donate last week.

American singer singer-songwriter Alecia Beth Moore aka Pink pledged a donation of $500,000 directly to local fire services stating that she is “totally devastated”.

Likewise, Australian actor Dacre Montgomery created the fundraising page and has raised over $180,000 in just 24 hours. He also pleaded fans to donate to bushfire victims.

Australian billionaire businessman Justin Hemmes announced that he would be donating $500,000 to the Rural Fire Services. He also took to his Instagram story and asked his fans to help him raise $1 million.

Australian actress, writer, and producer Rebel Wilson showed her support behind bushfire by auctioning off a special charity lunch at her $3.76 million Sydney home. She raised $100,000 at the Pacific Fair Magic Millions Polo at the Gold Coast. The star chose to accept two separate bids at $50,000 for the joint luncheon.

American comedian Nick Kroll collaborated with Australian Joel Edgerton to urge Fight Fire With a Fiver to encourage people to donate $5 each. On the other hand, he pledged to donate all fees from both (Sydney and Melbourne) of his shows to the fires.

American comedian and television host Ellen DeGeneres donated $100,000 to the RFS. She also pleaded to raise $5 million dollars via the GoFundMe app and encouraged her fans to make her reach her goal.

The 36-year-old Australian actor Chris Hemsworth proved that he is not only a superhero in reel but in real life as well. Hemsworth has pledged $1 million to help firefighters and residents affected by the Australian bushfires. Best known for playing Thor in the MCU franchise, Chris announced his donation news via his Instagram account.

The British restaurateur and television personality Lisa Vanderpump became the latest public figure to use her profile to raise awareness about the Australian bushfires. Similarly, Australian comedian Celeste Barber raised more than $30 million through her facebook donation page for the bushfire. Facebook noted over 830,000 people donated to her appeal and has a goal to reach $35 million.

The Kardashian-Jenner sisters took to their Instagram stories to raise awareness of the Australian bushfires. Kylie pledged to donate $1.5 million to the RFS. Whereas, Kim Kardashian donated an undisclosed amount.

When criticized about not donating to bushfire, Kim replied:

Australian professional tennis player Ashleigh Barty announced that she would donate all of her prize money from the Brisbane International tennis tournament to the Red Cross’s bushfire appeal. If Ash is to win the competition, the prize money is $383,000.