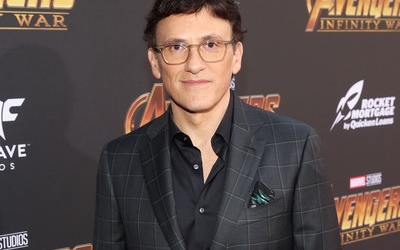 According to Celebrity Net Worth, 50-year-old Anthony has a net worth of $20 million as of April 2020- indeed, he made hefty sum as a director.

As Russo Brothers, Anthony & Joe most often work together as director & made directorial debut through 1997 films Pieces, it was theatrically released.

In 2006, Anthony got a breakthrough to success after serving as director of the comedy film You, Me and Dupree, starring Owen Wilson, Kate Hudson, Matt Dillon, and Seth Rogen.

The film You, Me and Dupree made a box-office collection of $130.4 million.

Further success of Anthony Russo came after he alongside Joe served as director of Captain America: The Winter Soldier (2014) starring Chris Evans.

As for a fact, Anthony directing major achievement came through the 2019 film Avengers: End Game (the sequel to Avengers: Infinity War).

It became the world’s highest-grossing movie of all-time; the movie collected $2.798 billion over the budget of $356 million. It featured many Hollywood stars:

Here is the list of Anthony’s film box-office collection:

What Is Anthony Currently Doing?

Anthony is currently working on his upcoming projects; he is an executive producer of 2020 film Cherry starring Tom Holland. Moreover, his other film Everything Everywhere All at Once is under post-production.

The film Exit West is under pre-production and announced to develop the film Past Midnight.

Furthermore, the IMDB reports that Russo will be serving as executive producer of TV series The Warriors and Magic: The Gathering; both are under pre-production.

Career Before Fame: Journey To Directing

As college students, their interest in directing developed; they released the film Pieces in 1997, with finances from student loans & credit cards.

The film viewed at Slamdance Film Festival got the attention of Steven Soderbergh, & even more, he came up with a directorial role offer to Russo Brothers.

Anthony & his brother Joe served as directors of 2002 film Welcome to Collinwood, where George Clooney and Steven Soderbergh were producers.

Then, in 2006, Anthony Russo made his breakthrough from the film You, Me and Dupree.

The estate came in the market in 2017 for an asking price of $28 million, however, it saw a slash of $12 million before Russo got hands on it.

Meanwhile, the American director still has ownership of the neighboring house in Los Feliz, which was for sale for $3.5 million in January 2020 but didn’t find a buyer.

According to Variety, Anthony Russo’s real estate also includes a Craftsman-style house in the L.A. community of Pasadena; he paid a whopping $5.8 million for the estate in late 2018.

Father Of A Child: Who Is His Wife?

Anthony was born on February 3, 1970, in Cleveland, Ohio, the USA. His father Basil Russo is an attorney & former judge while mother Patricia served as a homemaker.

Russo has a younger brother Joseph “Joe” Russo (born on July 18, 1971); together, they work as director of films & TV series.