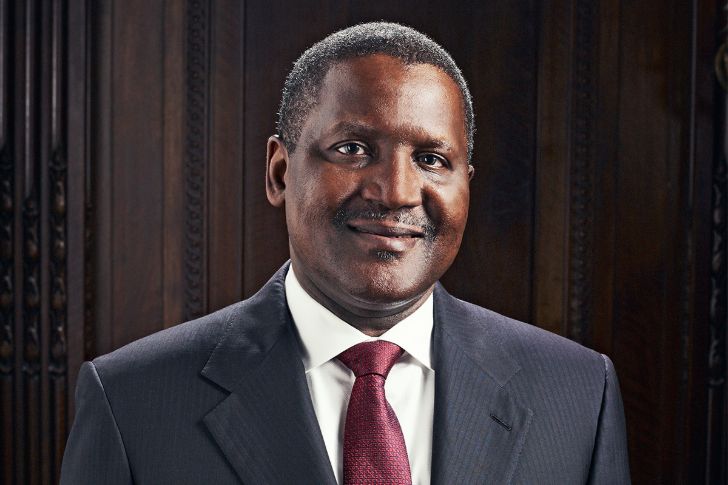 How Much Is The Net Worth Of Aliko Dangote?

Aliko Dangote is estimated to have a net worth of around $13 billion, according to Forbes, while other verified source claims his net worth to be $17 billion.

He primarily gathered his fortune as a Nigerian businessman, investor, and owner of The Dangote Group.

Networth of Aliko Dangote throughout years

As of December 2019, Aliko Dangote is worth $10 billion. With his net worth, he is named Africa’s richest man.

He took over the title of the richest person in Africa from Saudi-Ethiopian billionaire Mohammed Hussein Al Amoudi, with an income more than $2.6 billion in 2013.

How Did Aliko Dangote Earn His Wealth? Career Highlights

Although Aliko Dangote was born to a wealthy family, he started his professional career by borrowing around $3,000 from his Uncle at the age of 21. With the money, he used to import and sell agricultural commodities in his hometown.

His business went through the roof and paid the loan within three months. He used to make a net profit of more than $10 thousand on the best days. However, that was not his first business venture.

In an interview, he disclosed;

“I can remember when I was in primary school, I would go and buy cartons of sweets [sugar boxes], and I would start selling them just to make money. I was so interested in business, even at that time.”

In 1997, he realized that importing and selling as a middleman was very costly. He came to the solution, and he built a plant to produce products like pasta, sugar, salt, and flour. He started the small trading firm with the name The Dangote Group, which in later year relocated to Lagos.

As of now, the company accumulates an average annual revenue of $4.1 billion and is employing around 30 thousand employees.

The company expanded itself in 2005 under his own finance of $319 million and a mortgage loan of $479 million. The company is operating more than 18 subsidiaries like Dangote Sugar Refinery PLC., Dangote Flour Mills PLC., National Salt Company of Nigeria PLC., and Dangote Cements PLC.

Unlike other Nigerian billionaires who amassed their wealth from oil production, Dangote started his career in different paths but ultimately entered the oil and gas industry.

In 2007, the owner of the Dangote Group bought an oil refinery for $10 billion, which he hopes will be at full capacity by 2020. He expects that the refinery will produce 650 thousand barrels of oil per day.

The largest conglomerate in West Africa is now working on new business segments like real estate, steel manufacturing, and telecommunications.

Aliko Dangote is also involved in several charity works and campaigns. He has been continuously donating tons of money from his charity foundation, Aliko Dangote Foundation.

Recently in September, he was reported to make a donation of around $25 million. He donated $20 million to The Africa Center in New York City and $5 million to Bill & Melinda Gates Foundation in support of a $50 million capital campaign.

In 2014, he donated around $137 thousand to the National Mosque and contributed $413 thousand for raising awareness and stopping the spread of Ebola.

Back in 2014, a reliable source claimed that Aliko Dangote would soon be contributing $1.2 billion in charity.

The Nigerian billionaire has managed to live a lavish lifestyle, currently resides in Kano state, Nigeria. He also owns other mansions in Northern Abuja.

It comes as no surprise that Dangote owns a fleet of the most luxurious cars, including Bentley Mulsanne ($308 thousand), Maybach 57S Knight Luxury ($1.4 million), Mercedes-Benz CL65 AMG ($220 thousand), and Bugatti Veyron ($2 million).

For a man who possesses so much wealth, it is common for billionaires to own a private jet, so does the richest man in Africa. He purchased a Bombardier’s Global Express XRS for $45 million on the occasion of his 53rd birthday.

In addition, he also has a yacht packed with amenities and gadgets. The billionaire bought it in 2013 and has named it, Mariya, his mother’s name.

Aliko Dangote was born on 10 April 1957 in Kano State, Nigeria. He was born as the son of wealthy parents; father Mohammed Dangote and mother Hajia Mariya Sanusi Danatata. He has three siblings; brother Sani Dangote and sister Bello Dangote. He also had a younger brother who lost his life in the 1996 Kano air crash.

The Aries-born billionaire is married and divorced four times. He is currently reported to be living a lavish single life.

From his four romantic relationships, he and his ex-wives are blessed with a total of 15 children.

Moreover, he also has an adopted child, son Abdulrahman Fasasi.

How Old Is Aliko Dangote?

As of 2022, Aliko Dangote is 65 years old. He holds a Nigerian nationality and belongs to the black ethnicity.