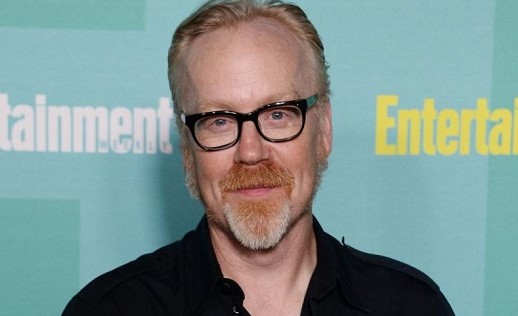 Furthermore, along with Jamie Hyneman, he co-created & judged in the engineering reality game show Unchained Reaction (March 18- May 3, 2012).

Now,  Adam works as editor and contributor at Tested.com.

Savage started his career as a set designer, animator & graphic designer, then got assistance to fame through stints in TV presenting, especially on Mythbusters and Unchained Reaction.

According to Celebrity Net Worth, 52-year-old Adam Savage has a net worth of $7 million as of April 2020.

Moreover, he has got his hands in model-making for box-office hit films like:

On June 14, 2019, Adam began hosting Science Channel’s TV program Savage Builds; it ran for a season with eight episodes that concluded on July 26, 2019.

No further update on Season 2 of Savage Builds is out for now.

How Much He Earns?

Even if Adam is yet to open up about his earnings, he surely earns in a 7-digit figure through his ventures in broad aspects: from graphic designing & special effects to TV presenting.

On average, in the USA, a visual effects designer can sum up a salary of $68,466 per year.

An avid user of Instagram & Twitter with over 948K followers & 1.4 million followers, respectively, the American special effects designer can sum up extra sum if he signs endorsement deals (officially yet to sign).

For instance, if Adam goes for a promotional deal via his Instagram, it can earn him $2,830 – $4,717 per sponsored post, as per Influencer Marketing Hub.

What Is He Currently Doing?

Since 2012, he serves as editor and contributor at Tested.com.

Other Ventures Adam Took Hands Into

As reported, Adam used to teach model making at the Academy of Art University’s Department of Industrial Design, in San Francisco. Formerly, he was the commencement speaker at Sarah Lawrence College (in 2012).

Since 2012, Savage co-hosts Still Untitled: The Adam Savage Project, a weekly podcast that features the talks of topics from science or movies & possible ways to make it ethic.

He is a regular presenter of The Amaz!ng Meeting, an annual skeptics’ conference by James Randi and since 2008, is a regular guest speaker in annual Maker Faire.

Father Of 2: Lives With His Wife In San Francisco

Adam Savage is in a marital relationship with his wife Julia Ward for over 15 years of April 2020. They married on September 11, 2004, but are yet to share children of their own.

From his previous relationship, Savage has twin sons: Addison and Riley.

Did you know? Adam Savage is an atheist.

Adam Whitney Savage was born on July 15, 1967, in New York City, New York, the USA, His father Whitney Lee Savage (1928-1998) was a filmmaker & painter while mother Karen is a psychotherapist.

Savage is the second youngest of 6 children; he has 2 elder brothers, 2 elder sisters & a younger sister.

As for a fact, Adam’s maternal grandfather Cushman Haagensen was a surgeon, specializing in breast cancer.

Adam Savage received an honorary doctorate degree from the University of Twente in the Netherlands, on November 25, 2011.

Did you know? He suffers from congenital otosclerosis, as a result, he wears hearing aids in both ears.