Skip to content
Home » GOSSIP » A Devastating Story Of A Women Who Lost Her Home And Business Following The Floods In The Yorkshire, Doncaster

A Devastating Story Of A Women Who Lost Her Home And Business Following The Floods In The Yorkshire, Doncaster 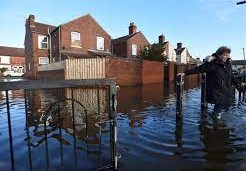 “I’ve Lost My Home, My Business, Everything”; Says One Of The Victims Caused By The Destructive Floods In The Doncaster

Life was going great for Pam Webb; a local owner of a Truffle Lodge luxury spa in Fishlake until the catastrophic flood hit her city.

She lost her home and business and was devastated when her insurers denied claiming her loss as the flood was excluded from the clause. Ms. Webb shared the story to the world as she wanted answers about what caused the flooding.

The disaster led 700 residents to leave their homes, and those who have stayed behind have been helping those trapped inside their properties.

As per the other reports, flood warnings had been issued late which caused more damage to the village. The people also claimed that they have been left with no support.

‘When the flood came in as fast as it did on Friday, I remained at Truffle Lodge until 11 o’clock on Saturday morning, lost power and realized it was sensible that I had to leave.”

‘It is underwater, totally can’t operate at the moment and I don’t know for how long.’

‘My insurance company has excluded flood from my policy. I feel really selfish in saying this and I hope that other people aren’t in this boat but I’ve lost my home and my business and my livelihood that I’ve worked so hard for.”

As per her, the flood has hit the village in 100 years and the low expectations led to ignorance and more damage.

‘Fishlake has never flooded in 100 years so my, if you want to say, anger is… why has it now flooded? You know, it’s happened so we need to now establish why and how and who should be accountable.”

‘Is it the flood defenses that weren’t sufficient to hold it? Did something give at some other point?

‘I’m not taking anything away from Sheffield, that’s great work was done there, but has it exacerbated the problem down here and we’ve now got a bigger problem here because of what happened there?’

Here is the heartbreaking video of the damages caused by the flood.

Hope the government will soon find a way to help victims.